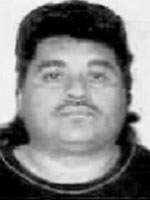 He was wanted by the FBI for his alleged participation in the burning, beating, torture and murder of his four-year-old stepson in , in February 2003.

According to the FBI:
* He was considered armed and extremely dangerous.
* He may had been involved in the transportation of illegal aliens from Mexico into the . He may had travelled to , , , or Mexico.
* He is known to have a violent temper, especially when he abuses alcohol.
* He may had been traveling with his girlfriend, Martha Patlan, who has also been charged with criminal homicide. They were believed to be accompanied by her young daughter, Mariana Cisneros, and their young son, Edgardo A. Espinosa. Both of these children were thought to be in danger of serious harm.
* The FBI offered a reward of up to $100,000 for information leading directly to the arrest of Genero Espinosa Dorantes.