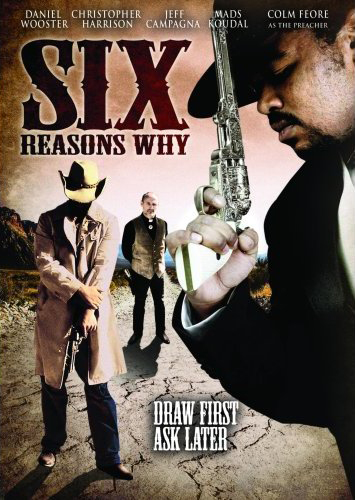 
"Six Reasons Why" is a 2008 western film Directed by The Campagna Brothers [cite news | author = Irene Kuan | title = Canadian filmmakers hit their target with indie western | publisher = | date = | url = http://ca.reuters.com/article/entertainmentNews/idCAN1853801620080918 | accessdate=2008-09-19] . The film stars Daniel Wooster as The Nomad, a vigilante, sent into the badlands by a preacher, played by Colm Feore. As the Nomad wanders the badlands, he kills every stranger he meets, with only a horse at his side. Christopher Harrison plays an orphaned Entrepreneur trying to cross the Badlands, with his indentured man, the Sherpa, played by Mads Koudal [ [http://sixreasonswhy.com/ SixReasonsWhy.com] ] .

Four men stand in a shootout, staring one another down until the audience is brought into the memory of one of the gunslingers: The Nomad. A stranger in the desert Badlands, Milton encounters the Nomad, and is shot dead while describing a vision of paradise just beyond the dunes. The Nomad proceeds to loot the remains of Milton, before heading off to camp for the night. After putting his horse down to bed for the night, the Nomad dreams of a preacher who send him off into the desert to protect a mysterious city, reminding him to ensure the horse is looked after. The Nomad awakens with the realization that the horse is more important to his mission than he is, and with a certainty that he is never intended to see his home again. Rather than kill the next intruder into his desert, The Nomad conspires with the next shady stranger he encounters to fake his own death, sending the horse home for the Nomad to follow. After the deal is struck, the Nomad leaves to meet two more strangers who have entered the badlands. Knowing that his horse is more his enemy than his friend, The Nomad takes a liking to these two strangers, The Entrepreneur and The Sherpa, and chooses to spend some time with them. After a long day of travel and a conversational dinner, they sleep around the fire. The Nomad dreams once again of the preacher and his warnings. When the Nomad awakes, his horse has vanished. Believing these two new strangers are responsible, he attacks and ties them up for questioning. He comes to realize that the true culprit must be the shady stranger he encountered earlier in the day.

The audience is drawn back into the 4-way shootout, this time, more tense, as guns are drawn. The perspective shifts now to the Entrepreneur's memory. He stands at a river with his father, discussing a the opening of a new station on the Monorail line that is currently under construction that leads into the desert Badlands. The next morning the Entrepreneur's father is assassinated by a shady Criminal who flees off into the desert. That evening, The Entrepreneur and his indentured man, The Sherpa, are drinking at a bar when a loud patron begins to insult the memory of The Entrepreneur's father. He gets up form the table and drunkenly beats the patron to death with his pistol. Once he and The Sherpa realize they would be arrested for the crime, they flee into the desert after The Criminal.

Once again, the shootout between The Nomad, The Entrepreneur, The Sherpa, and The Criminal appears, as the Entrepreneur reaches for his pistol. This time, the memory of The Criminal is revealed. He has been hired to kill a Monorail Tycoon the next day, which he dutifully does, fleeing in to the desert. He meets the Nomad, who spares his life to take advantage of his accuracy with a pistol in his faked death. The Criminal agrees to a deal and leaves The Nomad to meet him in two days. Later that evening, The Criminal spots The Nomad at a campfire with the son of his last kill. He assumes himself to be betrayed and decides to steal the horse.

Returning to the 4-way shootout, six gunshots abruptly go off, and each man falls to the ground, leaving the horse still standing. After the sun begins to set, one man stirs, gets up and follows the horse back home [ [http://sixreasonswhy.com/ SixReasonsWhy.com] ] .

Daniel Wooster plays The Nomad: A ruthless killer, trained from birth in an elite school for children who are pitted against one another for 18 years until a champion is made through survival of the fittest. This champion is set out upon the Badlands by the The Preacher with only the companionship of a horse to guide him, until his eventual death, at which point the horse returns for the next champion. The Nomad manages to become aware of the pattern that will eventually leave him dying alone in the desert, and plots to find his own way back home [ [http://sixreasonswhy.com/ SixReasonsWhy.com] ] .

Christopher Harrison plays The Entrepreneur: Orphaned by The Criminal and left with nothing but vengeance in his heart and a need to prove himself. With the death of his father, he has no power left in the Monorail company, and the only one still loyal to him is The Sherpa, who supports him in his plan to enter the Badlands and build the next station for the Monorail [ [http://sixreasonswhy.com/ SixReasonsWhy.com] ] .

Mads Koudal plays The Sherpa: Saved at a young age by the father of The Entrepreneur and offered employment to work off his debts, he is a loyal and caring friend of The Entrepreneur who has been there for him most of his life. Where one goes, so does the other, and as a team they urge one another on, for good or for ill [ [http://sixreasonswhy.com/ SixReasonsWhy.com] ] .

Colm Feore plays The Preacher: The political and religious leader of a xenophobic city to the west of the deadly Badlands, he presides over the treacherous training of the champions who he sends as companions to the horse as protectors of their secret [ [http://sixreasonswhy.com/ SixReasonsWhy.com] ] .

Jeff Campagna plays The Criminal: As the assassin of many officials and dignitaries, including the father of The Entrepreneur he chooses to exile himself in an abandoned coal mine where he conducts his business transactions on his own terms. Originally an aristocrat himself, he was tortured by the government once he was discovered as a rebel and a protestor. He detests any form of authority, now, and enjoys his job to a fault [ [http://sixreasonswhy.com/ SixReasonsWhy.com] ] .

Romas Stanulis plays The Zeppelin Scout: An employee of H2 Zeppelin the chief rival corporation to the Monorail. He found himself in the wrong place at the wrong time when he pipes up about the death of the father of The Entrepreneur [ [http://sixreasonswhy.com/ SixReasonsWhy.com] ] .

Mike Kolomayz plays The Barkeep: As the owner of the only bar in New Gibraltar, he's got quite a monopoly on entertainment and drink, which means he also gets most of the trouble coming into his establishment. As much as possible he tries to keep the violence to a minimum, but sometimes there's nothing he can do but pay off the local law to look the other way [ [http://sixreasonswhy.com/ SixReasonsWhy.com] ] .

Matt Campagna plays Milton Joyce: The latest in a long line of trespassers in the Badlands, Milton is looking for a prosperous and just lifestyle, and he has reason to believe he can find it just west of the Badlands. His journey west comes to an abrupt end when he comes face to face with The Nomad [ [http://sixreasonswhy.com/ SixReasonsWhy.com] ] .