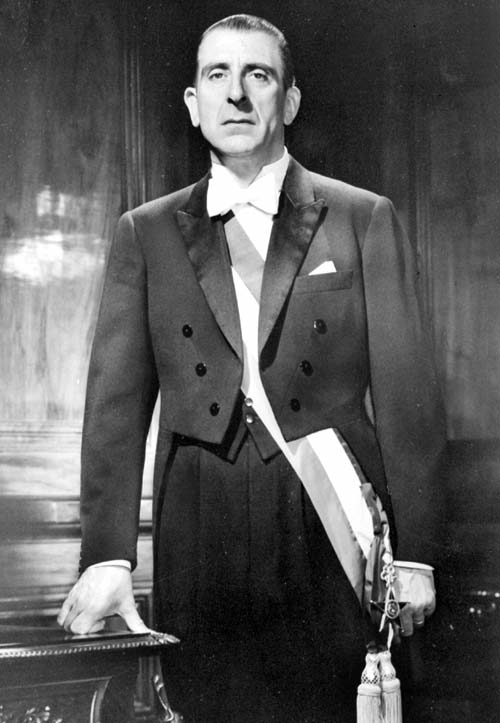 Eduardo Frei Montalva was born in Santiago on , , the son of Eduardo Frei Schlinz, a Swiss-born ethnic German from , and Victoria Montalva Martínez. He attended high school at the and went on to study law at the , graduating as a lawyer in 1933. He married and had 5 children.

He began his political career in the Conservative Party, but was among a group of young men who founded their own party in 1938: the Falange Nacional. In 1957, the Falange became the , and he became the undisputed leader.

He was minister of Public Works in 1945, and in 1949. He ran for president in 1958 before being elected in 1964. That year he was elected with his "Revolución en Libertad" ("Revolution in Liberty") slogan by a large margin (56%), defeating Socialist candidate who only received 39% of the vote, but who subsequently won the .

His campaign had been supported by the , who feared an Allende victory, with US$ 3 million, mostly used in the Chilean media. [ [http://www.odci.gov/cia/reports/chile/index.html#14 CIA Site Redirect — Central Intelligence Agency ] ]

After Allende's 1970 victory, Frei became convinced of what he called a "totalitarian project" to impose a Communist tyranny. His Christian Democratic Party supported the Armed Forces intervention to remove Allende from office in 1973, after the Chamber of Deputies on , , accused Allende of violating the Constitution. In November 1974 Frei wrote a historic letter to Mariano Rumor, President of the International Christian Democrats, endorsing the Armed Forces intervention and denouncing what he alleged was an attempt by Allende to impose in Chile a Communist dictatorship. [ [http://www.memoriachilena.cl/archivos2/pdfs/MC0023241.pdf Letter to Mariano Rumor, 8 November, 1973] , also at [http://es.wikisource.org/wiki/Carta_de_Eduardo_Frei_Montalva_a_Mariano_Rumor%2C_Presidente_de_la_Uni%C3%B3n_Mundial_de_la_Democracia_Cristiana wikisource] (Spanish).]

Frei later became part of the opposition against the dictatorship. Fact|date=December 2007

Frei died in Santiago, on , , after undergoing surgery for a stomach illness. His death was attributed to an infection, , stemming from surgery. He is buried in the .

His death is a matter of controversy due to allegations that he was poisoned by the Pinochet regime, allegedly using a toxin produced by the biochemist . After Belgian researchers from the University of Ghent reportedly found in Frei's body, the former president's family filed a lawsuit, which is still pending as of 2007 [ [http://news.bbc.co.uk/2/hi/americas/6289209.stm Ex-Chilean leader 'was murdered'] , , 23 January 2007] . Some commentators, notably conservative columnist Hermógenes Pérez de Arce, dispute the existence of the Belgian report, citing the denial by the University's chief of communications, Tom de Smedt, that an investigation had been done in that university [Pérez de Arce, Hermógenes, "En el nivel 49", "", 31 January 2007] .