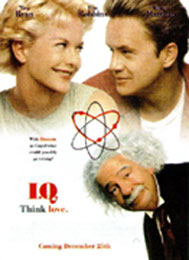 Tim Robbins is an amiable garage mechanic named Ed who finds Meg Ryan's character, Catherine Boyd, a beautiful and intelligent doctoral candidate, as she comes into the garage (accompanied by her stiff and fussy English fiancé, an experimental , played by ). There is an immediate connection, but she refuses to acknowledge it. Finding a watch she left at the garage, Ed travels to her address and finds himself face to face with (played by ), who is Catherine's uncle. Albert, portrayed as a fun loving along with his mischievous friends Nathan , Kurt, and Boris, sees in Ed someone who would be better suited for Catherine, and the four of them attempt to help Ed look and sound more like a scientist (i.e., a "wunderkind" in ), while at the same time trying to convince Catherine that life is not all about the mind but about the heart as well. This is intended to be Einstein's most enduring legacy to his niece as he realizes that he'll not be available for her for very much longer. Catherine eventually sees through the ruse but ends up falling for Ed anyway. The very last image in the movie is of a smiling Albert Einstein using a small telescope to spy on the two young moonstruck lovers as they take delight in each other's company.

For dramatic reasons, "I.Q.." fictionalizes several real people. Albert Einstein did not have a niece by the name of Catherine Boyd. Kurt Gödel was famously shy and introverted, unlike his fictional counterpart in this film. The movie gives the impression that Einstein and his friends were all around the same age, when in fact, they were between 17 and 30 years younger than Einstein. The real life died in , before the movie's time period.

Cast and roles include