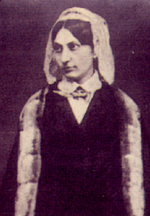 The princess Sayn-Wittgenstein in 1847

Carolyne zu Sayn-Wittgenstein (February 8, 1819 – March 9, 1887[1]) was a Polish noblewoman who pursued a 40-year liaison/relationship with Franz Liszt. She was also an amateur journalist and essayist and it is conjectured that she did much of the actual writing of several of Liszt's publications, especially his Life of Chopin. She pursued an enormous correspondence with Liszt and many others which is of vital historical interest. She admired and encouraged Hector Berlioz, as is clear from their extensive correspondence. Berlioz dedicated Les Troyens to Princess Carolyne. She was portrayed by Capucine in the 1960 film Song Without End. 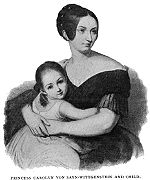 Carolyne zu Sayn-Wittgenstein with her daughter Marie, in 1840.

Karolina Elżbieta Iwanowska was born at Woronińce (today Voronivtsi (Воронівці), Ukraine), one of her parents' many estates in eastern Poland, then a province of the Russian Empire. On April 26, 1836, she married an officer in the Russian service, Prince Nikolaus zu Sayn-Wittgenstein-Ludwigsburg (1812–1864; son of Peter Wittgenstein) a member of an ancient Baltic German noble house.[2] They had an only daughter, Marie Pauline Antoinette (1837–1920) who later married Prince Konstantin zu Hohenlohe-Waldenburg-Schillingsfürst.

Princess Carolyne met Franz Liszt in 1847, during one of his musical tours in Russia. She had then been estranged from her husband for some time. The Roman Catholic Princess and Liszt began living together at Weimar from 1848. She eventually wished to marry Liszt and regularise their situation, but since she was still married and her husband was still alive, she had to convince the Roman Catholic authorities that her marriage to him had been invalid. After an intricate process, she was temporarily successful (September 1860). It was planned that the couple would marry in Rome, on Liszt's 50th birthday, October 22, 1861. Liszt arrived in Rome the previous day, only to find the Princess unable to marry him. It appears that both her husband and the Tsar of Russia had managed to quash permission for the marriage at the Vatican. The Russian government also impounded her several estates (she owned thousands of serfs), which made her later marriage to Liszt, or anybody, unfeasible. Furthermore, the scandal would have seriously harmed her daughter's marriageability—clearly the main reason why the Prince put an end to the scheduled marriage.

Subsequently, her relationship to Liszt became one of platonic companionship, especially after he had received minor orders in the Catholic Church and become an abbé. She was devastated by Liszt's death and survived him only a very few months. She died in Rome on March 9, 1887.

Carolyne zu Sayn-Wittgenstein was a writer but her works were mostly privately printed: the chief of these was: Des causes intérieures de la faiblesse extérieure de l'Église, 24 vols. This book was placed on the Index Librorum Prohibitorum[3]