The clone troopers of the Army of the Republic are soldiers in the fictional Star Wars universe, cloned from Jango Fett, a Mandalorian bounty hunter. They first appeared in Star Wars Episode II: Attack of the Clones, and returned in Star Wars Episode III: Revenge of the Sith where they were played primarily by Temuera Morrison. In the two TV shows, they are voiced by Andre Sogliuzzo and Dee Bradley Baker. In these movies, clone troopers comprised the bulk of the Army of the Republic during the Clone Wars. They are depicted as the main part of the armed forces of the Galactic Republic in its final years, becoming one of the largest armies ever assembled, only surpassed by the Separatist Droid Army. After the Clone Wars, they served as the nucleus for the armed forces of the Galactic Empire, eventually becoming the Imperial Stormtroopers.

In Star Wars Episode II: Attack of the Clones, it was revealed that the genetic template of the clone troopers was Jango Fett, one of the most feared bounty hunters in the Galaxy. In exchange for huge payment and an unaltered clone "son," Boba Fett[2], Jango provided his genetic material and Mandalorian battle training to the cloners on Kamino. All clone troopers' genes were manipulated; they had accelerated aging, making them grow and mature twice as fast as a normal human. The clone troopers were outfitted with armor styled after Mandalorian battle armor (notably the helmet and its T-shaped visor) and armed with weapons and vehicles produced in secret by Kuat Drive Yards, Rendili Stardrive, and Sienar Fleet Systems.

The Battle of Geonosis marked the first deployment of the clone troopers as well as the beginning of the Clone Wars. After Geonosis, clone trooper armies were led by Jedi generals, who were in turn accompanied by Clone Commanders. The clone troopers eventually carried out Order 66 at the behest of Chancellor Palpatine, turning the clones against their Jedi generals. This marked the end of the Clone Wars, as well as the death of the Old Republic. After the war and the birth of the Galactic Empire, the clone trooper army was reorganised into the Imperial Stormtrooper Corps.[3]

According to Star Wars Battlefront II, the surviving clone troopers were fitted with new armor and weapons, and became the Imperial Stormtrooper corps of the Empire. One of the few stormtrooper legions to remain completely composed of Fett clones throughout the era of the Empire was the 501st Legion, which was created by Albin Johnson beloved commander of 501st legion serial number TK-210.

Within the film series and in the Star Wars Expanded Universe media, a number of specialized trooper units are seen, including elite special forces units such as the Advanced Reconnaissance Commandos (ARC troopers), and Null ARCs[4], who usually work alone, and Republic Commandos, who operate in squads of four, with each member a specialist of some kind, created for the video game Star Wars: Republic Commando and reappearing in the "Star Wars Republic Commando" series novels by Karen Traviss. All clone commandos and ARCs were trained by Mandalorian mercenaries. The Null ARCs were trained and tested at the biological age of two (accelerated age 4), but had been deemed too incompetant. The chief scientist, Ko Sai, had decided for them to be either reconditioned, or terminated. One of the Mandalorian sergeants, named Kal Skirata, stepped in and took the six child Nulls to his quarters, where he trained and taught them about their Mandalorian heritage. Later, Kal trained a company of 104 commandos, making 26 squads of 4. Two of these squads were Theta and Omega. 74 other Mandolorian sergeants trained a company of commandos each, where 25 non-Mando sergeants trained the other companies. Another example is the aquatic SCUBA troopers, who appear in the animated series Star Wars: Clone Wars. Notable units in the novels are Delta Squad and Omega Squad. [5] [6] 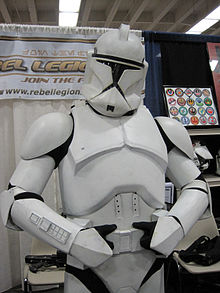 No physical clone trooper costume was produced for their first onscreen appearance. As revealed in the audio commentary of Star Wars Episode II: Attack of the Clones, every single clone trooper in the film is a computer generated image. In fact, the only thing present on the set was the actor, whose head was used during scenes requiring a clone's face. In Star Wars Episode III: Revenge of the Sith, the armor is redesigned, but remains computer generated. Within the fictional history of the Star Wars universe, this is the basis of the Imperial Stormtrooper armor and shows a gradual evolution in design toward the armor worn in episodes III-VI, known as "Phase II" armor.[citation needed]

Originally clone troopers were identified in rank by the color of their armor, as in this chart below. However, by Episode III: The Revenge of the Sith, colors became associated with a trooper's legion affiliation.