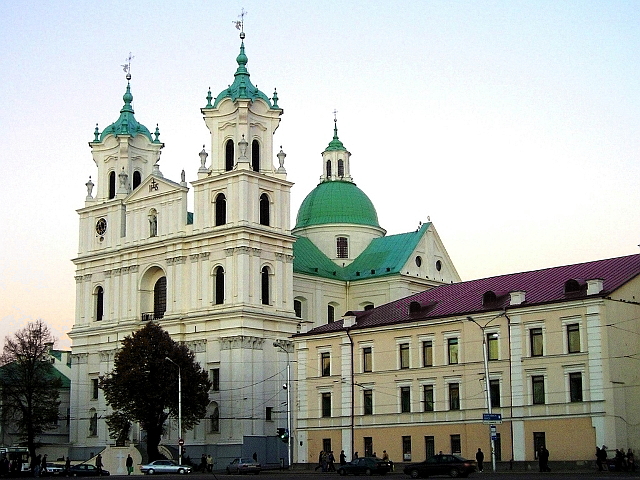 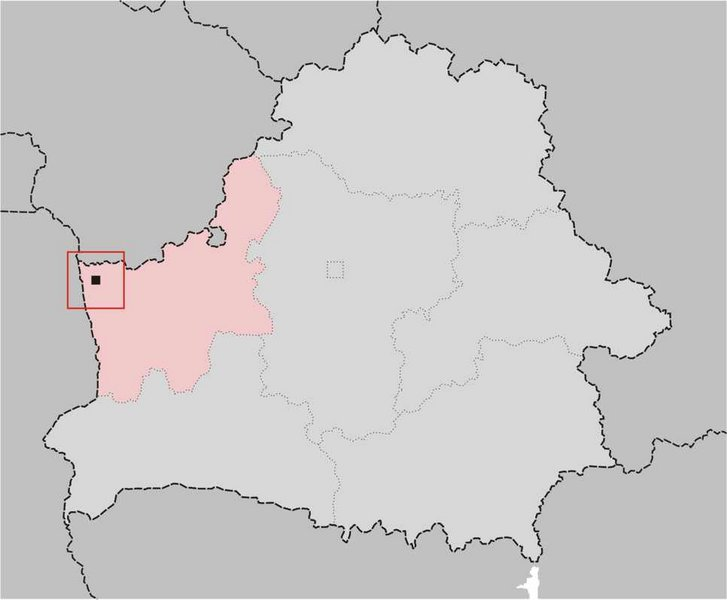 The modern city of Hrodna originated as a small fortress and a fortified trading outpost maintained by the s on the border with the lands of the Baltic tribal union . Its name derives from the verb "gorodit"', i.e., "to enclose, to fence" (see "grad" for details).

Mentioned in the under 1127 as "Goroden"' and located at a crossing of numerous trading routes, this Slavic settlement, possibly originating as far as the late 10th century, became the capital of a poorly attested but separate principality, ruled by 's grandson and his descendants.

Along with , Hrodna was regarded as the main city on the far west of , a border region that was neighbouring the original . It was often attacked by various invaders, especially the . In the 1250s the Hrodna area was overrun by the pagan , who later formed the on these territories. The famous Lithuanian was the prince of Hrodna from 1376 to 1392, and he stayed there during his preparations for the (1410). Since 1413, Hrodna had been the administrative center of a in .

To aid the reconstruction of trade and commerce, the grand dukes allowed the creation of a ish commune in 1389. It was one of the first Jewish communities in the grand duchy. In 1441 the city received its charter, based on the . After the First Partition of the , Hrodna became the capital of the short-lived in 1793.

An important centre of trade, commerce, and culture, Hrodna remained one of the places where the s were held. Also, the Old and New Castles were often visited by the Commonwealth monarchs. In 1793 the last Sejm in the history of the Commonwealth occurred at Hrodna. Two years afterwards, in 1795, Russia obtained the city in the . It was in the New Castle on November 25 of that year that the last Polish king and Lithuanian grand duke abdicated. In the , the city continued to serve its role as a seat of since 1801. The industrial activities, started in the late 18th century by , continued to develop.

After the outbreak of World War I, Hrodna was occupied by Germany (1915) and ceded by under the in 1918. After the war the German government permitted a short-lived state to be set up there, the first one with a "Belarusian" name - the . This declared its independence from Russia in March 1918 in ("Mensk"), but then the BNR's "Rada" (Council) had to leave Minsk and fled to Hrodna. All this time the military authority in the city remained in German hands.

After the outbreak of the , the German commanders of the feared that the city might fall to Soviet Russia, so on April 27, 1919 they passed authority to Poland. The city was seized by the the following day and Polish administration was established in the city. The city was lost to the on July 19, 1920 because of the . The city was also claimed by Lithuanian government, who were promised during the July 12, 1920 talks in Moscow that it would be transferred to Lithuania. However, Soviet defeat in the Battle of Warsaw made these plans obsolete, and Lithuanian authority was never established in the city. Instead, the Red Army organised its last stand in the city and the took place there. On September 23 the Polish Army recaptured the city. After the , Hrodna remained in Poland.

Initially, prosperity was reduced due to the fact that the city remained only the capital of a powiat, while the capital of the was moved to . However, in the late 1920s the city became one of the biggest Polish Army garrisons. This brought the local economy back on track. Also, the city was a notable centre of Jewish culture, with roughly 37% of the city's population being Jewish. The was forbidden by the Polish authorities and Belarusian schools were closed down.

During the Polish Defensive War of 1939 the garrison of Hrodna was mostly used for the creation of numerous military units fighting against the invading . In the course of the Soviet invasion of Poland initiated on September 17, there was heavy fighting in the city between Soviet and improvised Polish forces, composed mostly of s and volunteers. In the course of the Battle of Grodno (September 20&ndash;September 22), the Red Army lost some hundred men (by the Polish sources; by the Soviet sources - 57 killed and 159 wounded) and also 19 tanks and 4 APCs destroyed or damaged. The Polish side suffered at least 100 killed in action, military and civil, but losses still remain uncertain in detail (Soviet sources claim 644 killed and 1543 captives with many guns and machine guns etc. captured). Many more were shot in mass executions after being imprisoned. After the engaged Polish units were surrounded, the remaining units withdrew to Lithuania. In accordance with the the city was transferred to the of the Soviet Union, and several thousand of the city's Polish inhabitants were deported to remote areas of the Soviet Union. In 1941, the city came under German occupation, which lasted until July 1944. In the course of the World War II, the majority of Hrodna's remaining Jews were exterminated in . City was renamed by Germans as Garten (meaning "garden") in 1942.

Since 1945 the city has been a centre of one of provinces of the , now of the independent Republic of Belarus.

The city has one of the largest concentrations of in Belarus. It is also a center of Polish culture, with the considerable number of Poles living in Belarus, residing in the city and its surroundings.Though the orthodox population is also widely present here.

This city is known for its very important Medical University, where many students from different parts of Belarus acquire an academic degree, as do a good number of foreign students as well.Other higher educational establishments are Yanka Kupala State University (the largest regional education center in Hrodna Region) and Agricultural university.

The town was scored to be dominated by the Old Castle, first built in stone by Grand Duke and thoroughly rebuilt in the style by Scotto from Parma at the behest of , who made the castle his principal residence. Batory died at this palace seven years later and was interred in Hrodna. After his death, the castle was altered on numerous occasions, although a 17th-century stone arch bridge linking it with the city still survives. The Saxon monarchs of Poland were dissatisfied with the old residence and commissioned to design the New Castle, whose once sumptuous Baroque interiors were destroyed during the World War II.

The oldest extant structure in Hrodna is the "Kolozha" church of Sts. Boris and Gleb (Belarusian: "Kalozhskaya"). It is the only surviving monument of ancient Black Ruthenian architecture, distinguished from other Orthodox churches by prolific use of polychrome faceted stones of blue, green or red tint which could be arranged to form crosses or other figures on the wall. The church is a cross-domed building supported by six circular pillars. The outside is articulated with projecting pilasters, which have rounded corners, as does the building itself. The ante-nave contains the choir loft, accessed by a narrow gradatory in the western wall. Two other stairs were discovered in the walls of the side apses; their purpose is not clear. The floor is lined with ceramic tiles forming decorative patterns. The interior was lined with innumerable built-in pitchers, which usually serve in Eastern Orthodox churches as resonators but in this case were scored to produce decorative effects. For this reason, the central nave has never been painted.

The church was built before 1183 and survived intact until 1853, when the south wall collapsed, due to its perilous location on the high bank of the Neman. During restoration works, some fragments of 12th-century frescoes were discovered in the apses. Remains of four other churches in the same style, decorated with pitchers and coloured stones instead of frescoes, were discovered in Hrodna and . They all date back to the turn of the 13th century, as do remains of the first stone palace in the Old Castle.

Probably the most spectacular landmark of Hrodna is the Cathedral of St. , the former (until 1773) church on (now: Square). This confident specimen of high , exceeding 50 metres in height, was started in 1678. Due to wars that rocked Poland-Lithuania at that time, the cathedral was consecrated only 27 years later, in the presence of and . Its late Baroque frescoes were executed in 1752.

The extensive grounds of the Bernardine monastery (1602-18), renovated in 1680 and 1738, display all the styles flourishing in the 17th century, from Gothic to Baroque. The interior is considered a masterpiece of so-called Baroque. Other monastic establishments include the old Franciscan cloister (1635), Basilian convent (1720-51, by Giuseppe Fontana III), the church of the Bridgettine cloister (1642, one of the earliest Baroque buildings in the region) with the wooden two-storey dormitory (1630s) still standing on the grounds, and the 18th-century buildings of the Dominican monastery (its cathedral was demolished in 1874).

Among other sights in Hrodna and its environs, we should mention the Orthodox cathedral, a polychrome extravaganza from 1904; the botanical garden, the first in the Polish-Lithuanian Commonwealth, founded in 1774; a curiously curved building on the central square (1780s); a 254-metre-high TV tower (1984); and Stanisławów, a summer residence of the last Polish king.

* who won gold medals in gymnastics at the 1972 and 1976 Olympics.
* , Israeli politician, Irgun activist and father of .