The Killer Is Loose

The Killer Is Loose 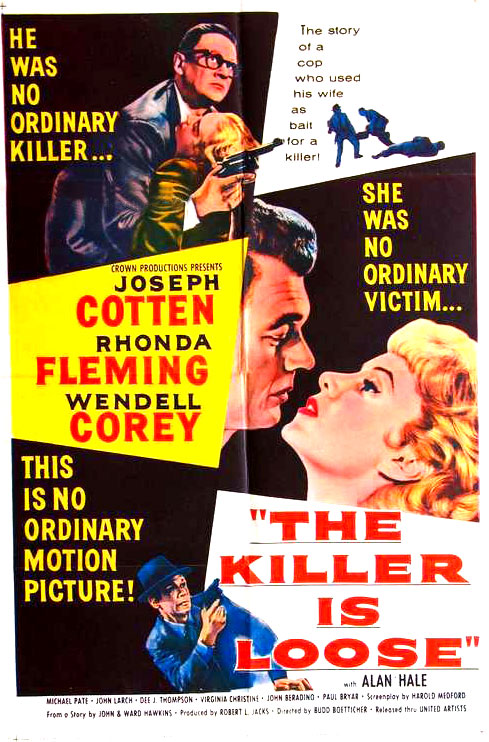 An employee for a savings and loan desperate for cash plans and successfully robs a bank as an inside job. At first bank employee Poole is considered a hero during the bank robbery but the police quickly figure out he's involved in the crime. The police catch up with Poole and his young wife at their apartment. Poole's wife is shot to death accidentally. Poole is sent to prison.

While behind bars, Poole plans his escape and revenge on the men that killed his wife.

Critic Bruce Eder gave a more favorable review and wrote, "Budd Boetticher was a filmmaker of consummate skill and many surprises, as anyone who's seen his best Western dramas can attest. "The Killer Is Loose" (1956) only enhances his reputation in a totally unrelated genre, and in a stylistic mode that's about as far as he could get from his most familiar work. Using a cast of conventional -- albeit top-flight -- Hollywood professionals, Boetticher takes them out of the studio and puts them into an almost totally location-shot drama, and turns them loose in that naturalistic setting. The result is an array of performances that are as arresting as the script is filled with improbabilities; indeed, the narrative momentum of Boetticher's direction, coupled with a handful of excellent performances, overcomes a script that is just a little too heavy on coincidences to otherwise play true." [amg movie|id=1:97713|title=The Killer Is Loose.]

More recently, critic Dennis Schwartz wrote, "A typical 1950s noir, distinguished by its rapid pace and taut script, that delves mainly into the character of the villain -- making him out to be someone who went over-the-edge when he couldn't take being ridiculed as a failure, anymore...The suburban atmosphere and the no-nonsense style of telling the story add to the blandness of the story and the failure to elicit anything out of the ordinary to the build-up of the suspense that comes with the climax. The result is a watchable film which could be seen for the sense of nostalgia of the 1950s it evokes, a time when it was more receptive for noir to work as well as it does." [ [http://www.sover.net/~ozus/killerisloose.htm Schwartz, Dennis] . "Ozus' World Movie Reviews," film review, . Last accessed: .]