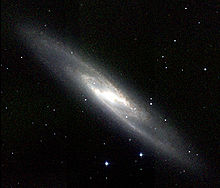 A disc is a component of disc galaxies, such as spiral galaxies, or lenticular galaxies.

The galactic disc is the plane in which the spirals, bars and discs of disc galaxies exist. Galaxy discs tend to have more gas and dust, and younger stars than galactic bulges, or galactic haloes.

It has been noted that the orbital velocity of stars in the disc of most disc galaxies is inconsistent with the amount of luminous matter calculated for the galaxy. A possible explanation for this problem is the non-luminous dark matter.