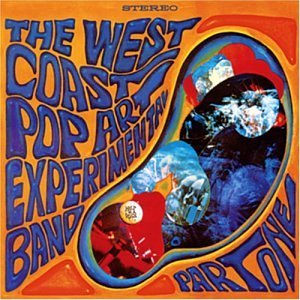 
The West Coast Pop Art Experimental Band was an American rock band of the late 1960s, based in , .

In about 1960, Bob Markley (b. Oklahoma, c.1932 - ?), the adopted son of an oil tycoon, and a law graduate, moved to Los Angeles with hopes of becoming a star. He was already a local TV personality in Oklahoma, but his initial attempts to develop a Hollywood career, either in movies or as a pop singer, met with little success.

At around the same time, brothers Shaun (b Colorado Springs, 1946) and Danny Harris (b Colorado Springs, 1947), children of composer , also moved to Los Angeles, and by 1963 had both begun playing with a teen surf band, the Snowmen. When they started attending Hollywood Professional School in 1964, they met up with (born 1948), who had been playing in several groups, latterly the Rogues. The Harris brothers and Lloyd decided to form a new band, initially called The Laughing Wind, and they recorded demos for a mutual friend, record producer . Fowley already knew Markley, and suggested that the band use some of the latter’s lyrics.

In 1965, Fowley arranged a private party in Markley’s house at which performed, and which the Harris brothers and Lloyd also attended. Markley was impressed by the large number of teenage girls attracted by the band, and the much younger musicians were impressed by Markley’s financial resources and potential ability to fund good quality equipment and a light show. Fowley encouraged them to join forces and, with the addition of drummer John Ware, The West Coast Pop Art Experimental Band was formed. The general approach was intended to parallel that being developed on the east coast by and the . Markley used his legal background to ensure that he held all rights to the band’s name.

The band’s recording debut in 1966, "Volume 1", featured Michael Lloyd, Shaun Harris, Dennis Lambert (guitar) and Danny Belsky (drums), with Markley on some vocals. It seems that much of the material was completed before the time Markley became involved. The rudimentary album included contemporary hits and original compositions and was recorded in a self-made studio in San Vincente, just outside Beverly Hills. The album was originally issued on the tiny "Fifo" label in Hollywood, and probably only 100 or so were made at the time. It was reissued on vinyl in 1994.

With their impressive light show, the band became popular around Los Angeles and were signed by . Their first "proper" album, "Part One", ranged from anthemic pop songs and acoustic ballads to harder-edged psychedelic numbers. It reflected the tensions between the band’s musicians and Markley, who effectively controlled the band’s output but who was regarded by the others as musically untalented. Markley contributed rambling pseudo-psychedelic lyrics and spoken sections, and the album also included ill-assorted inputs from nominal co-producer , songwriters and , drummer and pianist . Disputes between Markley and Michael Lloyd also led to the inclusion of guitarist Ron Morgan (1945–1989), who over time became a fully fledged member of the band.

Recorded and released in 1967, "Volume Two – Breaking Through" was a more ambitious and coherent album, with all of the tracks credited either in whole or in part to members of the band. It featured Markley’s anti-war rant "Suppose They Give A War And No One Comes?" – partly based on a speech by and later covered by Punk band – and the song "Smell of Incense", featuring Morgan’s guitar work and later covered by The album also started to demonstrate Markley’s lyrical obsession with young girls.

The next album, "Volume III - A Child's Guide To Good And Evil" is generally regarded as the group's high point. However, again the naive peace-and-love message of some of the songs sat uneasily beside the ironic cynicism of tracks like "A Child Of A Few Hours Is Burning To Death", and the songs showed a tension between the Harris brothers’ melodies, Morgan’s strident lead guitar and effects, and Markley’s sometimes bizarre declamations. By this time, the band effectively consisted of Markley, Morgan and Shaun Harris, with Danny Harris having withdrawn through illness.

The two Harris brothers, both disillusioned with Markley and with the group’s lack of commercial success, reunited in 1968 to form a touring band, California Spectrum, apparently also with Michael Lloyd’s involvement. However, this was not a success, and they returned to record a further West Coast Pop Art Experimental Band album, "Where's My Daddy?" This was credited to a line-up of Markley and the Harris brothers, although both Lloyd and Morgan also contributed. In 1970, a further album emerged, "Markley, A Group", which, although presented as a Markley solo album, had the active involvement of the whole band, including both Lloyd and Danny Harris.

After that time, The West Coast Pop Art Experimental Band ceased to exist. Michael Lloyd became the Vice President of A & R at MGM, aged 20, in 1969, and went on to win a with , to produce hits for the , and , and to produce the best-selling soundtrack to "". Shaun Harris released a solo album in 1973, and worked with , but eventually retired from the music scene to set up a successful children’s film festival. Danny Harris also released a solo album, in 1980, and has worked as a folk musician and actor. Ron Morgan went on to join and then a touring version of the , and later worked as a cab driver and janitor, before his death from hepatitis in 1989. Bob Markley worked as a record producer for a short while, but then ran into legal issues arising from his fascination with underage girls,vague|date=January 2008Fact|date=April 2007 as well as other domestic and health problems. He was last heard of in a mental hospital in the mid-1990s.Fact|date=April 2007

* Sleeve note on "Vol. 2 (Breaking Through)": "Every song in this album has been written, arranged, sung and played by the group. No one censored us. We got to say everything we wanted to say, in the way we wanted to say it." &mdash; Bob Markley
* Michael Lloyd was the godson of .