Slave to the Grind

Slave to the Grind 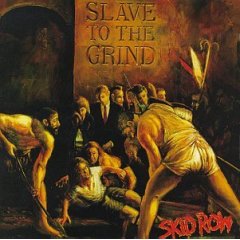 "Slave to the Grind" is Skid Row's second album, released on , . "Slave to the Grind" is notable for being the first heavy metal album to hit #1 during the era, and many other metal albums followed, such as "The Black Album" by , and "" by . This caused many metal fans to wonder about past chart positions by past albums due to SoundScan being more accurate. Although it hit first in the era, it only sold just over 4 million albums worldwide as of the end of 1996.

Two different versions were released: the original version, and the "clean" (censored) version. The clean version replaced the song "Get the Fuck Out" with the less-offensive "Beggar's Day".

"Slave to the Grind" marked the band's shift towards a heavier sound, now clearly identifiable as heavy metal, with songs such as the title track and "Mudkicker" bordering on thrash. The lyrics were more complex, criticizing modern ways of life, authority, politics, drugs, and organized religion, among other topics.

Sebastian Bach's father painted the cover art, which is actually a long mural, continued inside the album's booklet. It is set in the medieval era, yet features people using technological gadgets of the present day.