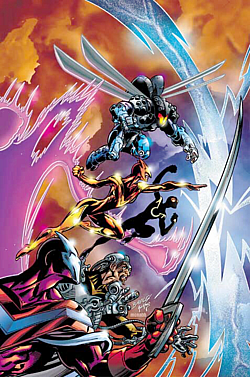 members=Citizen V
Beetle
Fixer
Scream
Smuggler
Meteorite
base=
memberlist=
subcat=Marvel Comics
hero=
villain=y
sortkey=PAGENAME|The Redeemers were a team of s in the universe who, under government control, adopted the prior identities of several of the Thunderbolts in return for lighter sentences. They began to appear in "Thunderbolts" #46, appearing as a group in "Thunderbolts" #50, before most of them were killed in "Thunderbolts" #56.

The Redeemers were first used by a mind-controlled to fight the Thunderbolts. They were composed of:

*Citizen V - John Watkins III, the grandson of the original CV, possessed by Baron Helmut Zemo.
*Beetle - Leila Davis, the wife of the Ringer, who wore an updated version of the Beetle-powered armor.
*Fixer - P. Norbert Ebersol, his broken neck healed by his robotic counterpart Techno.
*Scream - A mysterious sonic entity, actually Songbird's former lover Angar the Screamer.
*Smuggler - Conrad Josten, the younger brother of Atlas. His suit allowed him access to the dimension.
*Meteorite - Valerie Barnhardt, the illegitimate daughter of Cardinal and New Warriors pilot Sprocket who wore a suit which could fly and generate a "hard air" sheath.

After the Thunderbolts were disbanded and most members pardoned, Jolt and Charcoal were added to the Redeemer program. The team trained briefly with , who led them at the government's request while Citizen V was tied up on business.

When Graviton returned to Earth, looking to fight the Thunderbolts, he found the Redeemers at their Mt. Charteris headquarters instead, and proceeded to attack and massacre the team. Scream vanished in a vacuum. Charcoal was ripped apart and spread across the desert as dust. The gravitational forces keeping Jolt's bioelectric form together were removed, dispersing her body. Meteorite was left floating in the upper atmosphere, suffocating. The Beetle armor was crushed into a tiny box. Smuggler was hurled into the sun. While Citizen V and Fixer escaped the assault, the Redeemers were no more [.Cite comic | Writer = Fabian Nicieza | Penciller = Patrick Zircher | Inker = Al Vey | Story = Beyond Redemption | Title = Thunderbolts | Volume = 1 | Issue = 56 | Date = November 2001 | Publisher = | Page = | Panel = | ID = ]

Since the dissolution of the Redeemers, Jolt, Scream, and the Smuggler have all resurfaced.

The America Redeemers, usually called just the Redeemers, were a team of rebels organized by the version of Nighthawk.