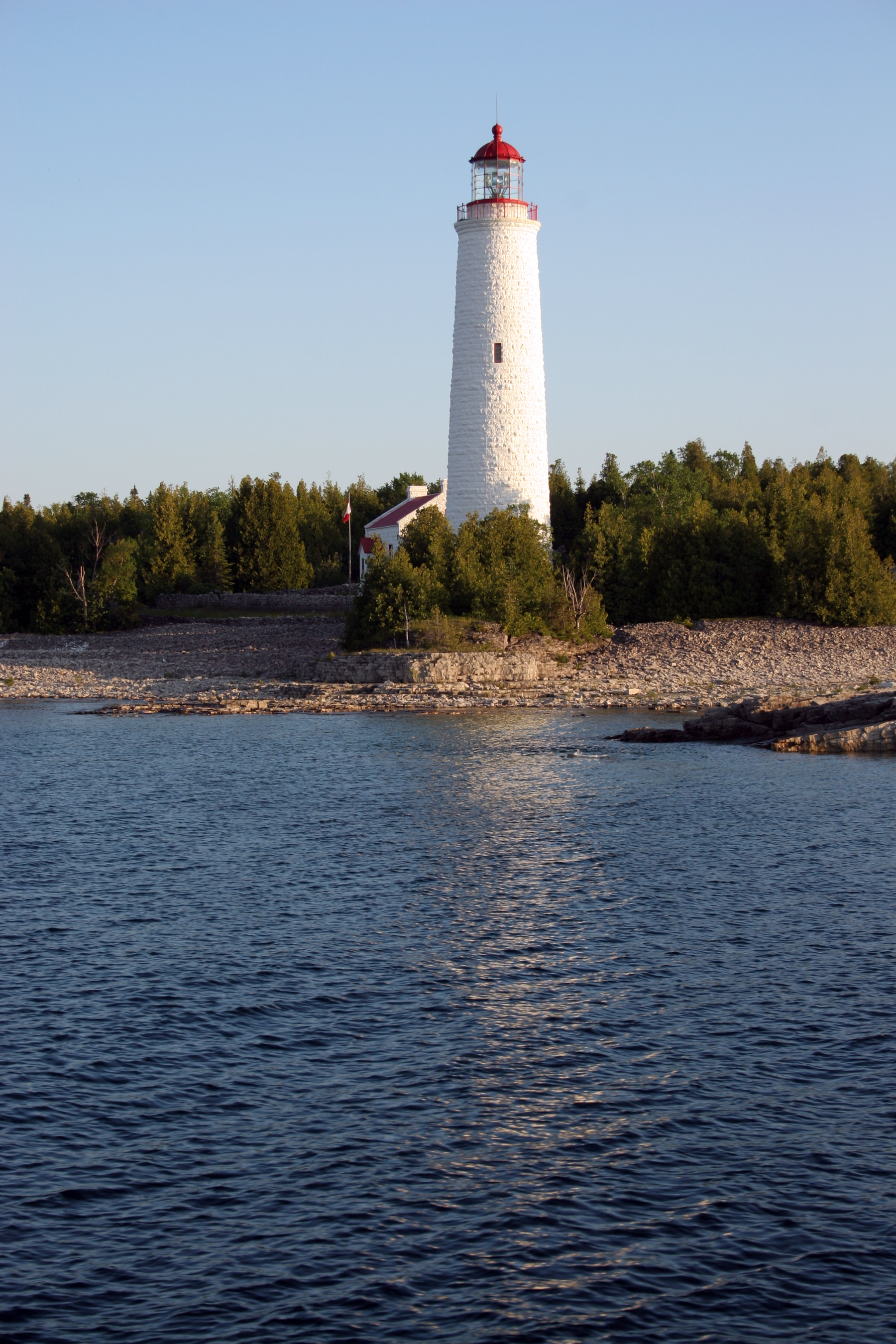 The Cove Island Lightstation located in , on the , , has stood guard, warning Great Lakes mariners navigating the treacherous narrow channel between and , since it became operational in October 1858.

Construction began in 1855 with a crew that consisted of: 7 masons/stone cutters, 10 labourers, 1 blacksmith, 1 foreman and 3 horses. One of the workmen left his mark by scratching his initials and the date in wet mortar, halfway up the tower. While under construction, the crew kept a light burning on the island by placing a lantern at the top of the unfinished tower.The lamp itself underwent several transformations starting with an Argand lamp fueled with sperm whale oil, then a flat wick coal oil lamp, replaced with an oil vapour light about 1900. Vapourized kerosene was burned to keep the beacon aglow. An on-site generator provided electricity during the 1950s and in 1971, an underwater power cable was laid from to the island.Similar in style to the other lighthouses on , at and on , the Cove Island lighthouse has 5 sets of stairs with 15 steps each, one set with 11 steps and the final curved iron stairway to the lamp room has 9 steps (total: 95 steps). An iron door leads into the lamp room. The stone lightkeeper's cottage adjacent to the tower was built at the same time. The "new" lightkeepers house was built in 1970 a short distance from the tower.

This lightstation was continuously manned from 1858 to 1991, making it the longest keeper-occupied lightstation in Ontario.

George Collins, 1858 - 1860, was the first person to serve as light keeper at the Isle of Coves. Born in , in 1817, George Collins went to sea at the young age of 12 where he traveled the globe. By his early 20's, Collins had risen to the rank of captain In 1851, Collins immigrated to Canada where he settled in Kingston before moving to in 1855.

When word of the were soon to be completed and become operational spread throughout West, applications for positions as light keepers came in from all over the country. With his vast maritime experience George Collins applied for the position of light keeper at the near his home at . For some strange reason was appointed keeper at the Isle of Coves instead. David McBeath, on the other hand, applied for the light keeper's position at Isle of Coves, and was given the job at Nottawasaga instead.

David McBeath, 1860 - 1872 Of all the fascinating stories the Isle of Coves Light station has to tell, nothing compares with the drama of David Mc Beath and his family running out of food.

It was early December 1860, and with winter fast approaching, light keeper David Mc Beath, his wife Mary Jane, and their five young children were quickly running out of food. For weeks they had to ration their food. An urgent letter sent by Mc Beath through D.C. Smith in early November to the Public Works Department went unanswered. Twice Mc Beath tried to flag down a passing vessel with no success. He was desperate for food to feed his starving wife and children. The lake was beginning to freeze. Mc Beath had an extremely difficult decision to make: stay on the island in the hope that food may arrive soon and risk starvation, or load his family into the boat and take his chances on the cold turbulent lake and reaching safety on the mainland.

Superintendent of Lighthouses D.C. Smith, on becoming aware of Mc Beath's situation sent a letter dated November 8 th , 1860 to Public Works Secretary T. Trudeau, stating the Mc Beath family was “in indigent circumstances with a large family, and in winter season cannot lay in his stock of provisions. ”

George Currie, 1878 - 1902, is remembered for his part in the aftermath of the sinking of the schooner 'Regina' off Gat Point, Cove Island, on 10th September, 1866. Only the captain, Amos Tripp, was lost during the storm and his body was found and buried on Cove Island by George Currie. On September 25 th in his personal diary George Currie wrote: “went to west side of island to-day, found the body of Captain Tripp who was drowned on the 10th inst. - sewed him up in Canvas and buried him, the topmasts are still to be seen above the water. . .”

Two weeks later George Currie recovered the remains of Captain Tripp and about October 1st returned the body to his family aboard the steamer Jane Miller for internment in Owen Sound.

Harold Banas, 1945 - 1946 The bride of Cove Island's first wedding ceremony, Iris Banas, 19, wife of Lighthouse Keeper Harold "Hal" Banas, is happy that she traded mainland life to be one of Cove island's three inhabitants. Earl Banas 22, assistant and brother of light keeper Hal Banas, is the third member of the trio.

"The island it is a wonderful place. I wouldn't mind living here for years and years, said the former Iris Hine of Killaloe, near Ottawa."Hal and Iris pulled a surprise on me said Earl, best man at the wedding. "I didn't know a thing about it until I met the minister and he said his visit was to officiate at the marriage."The ceremony was performed on a high rocky platform directly below the light tower. "In the excitement I forgot the ring and the ceremony was held up for a minute while I went inside the house to find it.. " Earl related. Rev. E.B. Arrol of officiated. Six people, including the principals and Mrs. Arrol, were present at the ceremony.

William (Bill) Spears, 1949 - 1976, has spent a lifetime keeping the lamp lit at lighthouses around the . He was only six months old when his father William, mother and sister Viola moved to F to assume the position of light keeper.

From April to December Bill Spears and his seven sisters lived their young years in the keeper's red and white house on the island. He recalls his mother worried a lot about the isolation of an island lighthouse. In those days, there were no radios and no helicopters to come to the rescue if someone needed urgent medical attention.

As a young boy Spears recalls wandering the shore of picking up the remnants of ships that broke up and went down in the great storm of 1913. “ The lake can get angry very quickly ," he says. " Ten minutes if she really gets down to blow.”