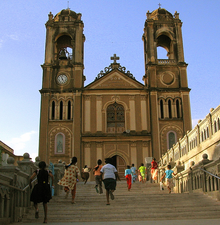 St. Josephs, the seat of the Archbishop of Hyderabad