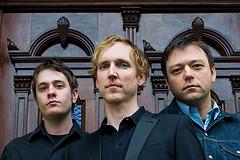 Earwig is an band from Columbus, . Its frontman is Lizard McGee, head of the self-described "micro-indie" LFM label. Playing as a trio, a staple of the band's sound are verses where the guitar drops out and the bass dominates the melody. With their 1994 debut, "Mayfeeder", earwig established themselves locally as comparable to a more lo-fi version of acts like and . While they have drawn occasional national attention, they've remained unable to break out of the underground, ultimately overshadowed by the explosion of the 1990s.

According to bassist Matt Wagner when asked about the origins of the band name," Lizard is a big fan of R.E.M. and its rumored the way they chose their name was to open a dictionary at random and the first word the point to is what they name their band, they pointed to R.E.M. One day Lizard was up in an old attic and decided to choose the band name in the same way as R.E.M. did. He opened this old dusty dictionary about five times not liking the word any of them, then on the sixth try he pointed to a word but accidentally killed an earwig with his finger, hence the name Earwig."

The History of Earwig

Having played out as early as age 16 in local band he decided to work on his own he had continued to write songs in the intervening years, but he needed a band to fill them out. Over a weekend in February 1992, he slammed together a quick demo tape and came up with Earwig. The response was very promising, after sending the tape out blindly to zines and labels alike, he got calls back from megalabels such as 4AD and Capitol.According to Lizard, "I knew that I wanted to have some type of project of my own. When we recorded the cassette, I had no idea that we were going to actually start a label or a band; it was just something to do. So when people contacted us from 4AD, we were a little petrified. We didn't really know if that was what we wanted to do, and the band as it was then wasn't really indicative of where I wanted to go. So we never called them back until about a year later. By then the people who had contacted us were long gone, but we had Lizard Family Music."

Rich Cefalo, meanwhile, was busy with the creative and production end of the band and label until a few weeks before the release of their debut CD, Mayfeeder. "We knew all along that Jeff wouldn't be continuing with us forever; he had a lot of other commitments, but we were pretty sure that he would tour with us. And we knew that Terry was in the process of applying to med schools out of state and wouldn't be able to go on tour. But about two weeks before the Mayfeeder CD release party, Jeff let us know that he absolutely wouldn't be able to tour with us. So we were kinda fucked, and Rich had to learn thirteen songs in a week. He was a pretty young bassist then-he'd picked up a guitar before but never played out."

They managed to survive the tour, however, and emerged a year later a much tighter and coherent trio. Lizard originally handled most of the songwriting with some creative direction from Rich, but things have started to change. "Whereas originally, I would do most of the writing and just basically come in and show Jeff and Chuck what it was we wanted, recently Rich and Chuck have written a couple of songs. On our upcoming compilation, we have two songs, "Dress" and "19", and only one of them was written by me. We've started to collaborate a lot more."

Earwig is featured with Interview and Photo in Issue No. 61, 2007

In 1996 drummer Charles Palmer left the band due to a re-occurring hand injury and was briefly replaced with Brad Swinarski, who played only two shows with Earwig before leaving the band due to other commitments. Brad had two recording sessions with the band resulting in 3 songs released. 1. A cover of ‘Do They Know It’s Christmas” released on the LFM Chris-single cassette. (very rare and hard to find), 2. Anatomical Gift and 3. Two Dragons…both appearing on Perfect Past Tense. In 1996, Justin Crooks, who was previously the drummer for LFM band Parsnip (a Columbus, high-school punk band which included now well know hip hop artist RjD2 on guitar. Parsnip released a 7” on LFM, also very, very rare), joined Earwig on drums. This trio of Rich Cefalo/Bass, Justin Crooks/Drums, Lizard/Gtr vocals recorded Perfect Past Tense with Steve Evans (also produced the Major Label debut of Thomas Jefferson Slave Apartments on American Records among others) and with producer Jared Kotler (producer of multi-planinum selling band Marcy Playground/Capitol Records among others) in Long Island, NY. The band toured the Midwest and east coast, eventually releasing a very limited , hand-pressed, early edition of Perfect Past Tense in late 1999 at a show in Columbus. Then Rich Cefalo moved to NYC (he went on to direct the music video for the song “The Horror”, the first single off of RjD2’s debut album ‘Deadringer’). Rich now plays in the NYC band ‘Scary Party’ with Chuck Palmer (who also moved to NYC in 2000) on drums.

Lizard McGee moved out to in 2000 and released the widely available version of Perfect Past Tense on CD on LFM Records that same year. That same year he began running LFM Records completely on his own from California, increasing their distribution and recognition. Lizard did 2 solo tours of the West Coast, playing shows from , to Phoenix, and . This was a pivotal moment in time for Lizard McGee and his band Earwig for while he was in California he was not just solo touring but he was establishing industry contacts and securing deals to feature Earwig's music in several indie films and DVD documentaries. Previously, when Rich Cefalo moved to NYC and was unavailable (but before he officially left the band in late 1999), Matt Wagner (of LFM Band Preston Furman) sat in with Earwig on the bass for one show in Athens, Ohio at Follett’s Bookstore. Matt also played bass during 1999 with the “LFM All-Stars” which included Justin Crooks on the drums, Brad Swinarski on keyboards and Lizard McGee on guitar and vocals.

Lizard moved back to in 2002. Earwig had songs featured in Disney/Touchstone TV production “” on network TV in 2002. In 2004 Earwig’s music was used to replace the music on for an Unauthorized DVD release about the Grunge-rock band. This DVD release from a UK company was largely panned with poor reviews. If you read the reviews, many people are upset when they found out that the DVD contained no Nirvana Music. But there are people that were excited to get turned on to a new band and Earwig gained many new fans through this exposure. This DVD is available for purchase online through . [ [http://www.amazon.com/exec/obidos/tg/detail/-/B00009MEFK/qid=1069540741/sr=1-3/ref=sr_1_3/102-0876633-2639362?v=glance&s=dvd Amazon.com: The Untold Stories: Nirvana: Movies & TV ] ]

Earwig's debut album, "Mayfeeder", brought this band to be and rose them up from the bottom to the top of the Columbus underground scene, being the catalyst of the greatness to come. "Dinosaur Song", Lizard told, was taken verbatim from a dream his girlfriend had. "She woke me up one night and she just turned to me and said, 'I had a dream that we were dinosaurs, with little arms and long tails and big big scales, and you were trying to hold my hand.' I thought it was so perfect that I went and wrote it down. The song's first two verses are essentially the same as what she said to me. A friend of mine made a kid's book from the lyrics."

Despite the bitterness and melancholy evinced by some of Earwig's songs, ("Wounded Knee" and "Mink" come to mind), songwriting isn't necessarily a form of therapy for Lizard. "I don't sit down to write a song based on this specific experience, although sometimes I'll look back and say, oh yeah, this is about that time in my life. And a lot of people have mentioned that they see childhood things in my music but I don't look at writing songs like I'm trying to work out a fucked-up childhood or anything. It doesn't stem from problems even if unconsciously my songs are about certain times in my life. I think I'm a pretty well-adjusted person."

Earwig's debut single, [http://allmusic.com/cg/amg.dll?p=amg&sql=2:DINOSAUR%7CSONG/WOUNDED Dinosaur Song/Wounded Knee] , came out on LFM in 1993 with their first album, [http://allmusic.com/cg/amg.dll?p=amg&sql=2:MAYFEEDER Mayfeeder] , in 1994. Foloowed by a national tour in the summer of 1994, when Bored In Chicago was recorded at a tour stop at the Elbow Room in Chicago. Bored in Chicago is taken from a cassette recording of the night’s performance direct from the soundboard at the club. It was extensively bootlegged and eventually “officially” released as Earwig’s first LIVE album in 1995.

In 1996 LFM Records was featured in an article for the Columbus Dispatch. Due to the media hype surrounding the search for the “Next Seattle”, the magazine came to Columbus and featured a full page photo of LFM Records/Earwig with an article on how Columbus was a contender for the next big break-out scene in America...ie: The Next Seattle. [ [http://www.lizardfamily.com/lfm_records/history/Past_Articles/past_articles.html Past Articles ] ]

Five years after the release of their debut full-length, Mayfeeder, Earwig resurfaced from the Columbus, OH indie rock underground with 1999's Perfect Past Tense. . A previously available as part of the group's 1994 live effort, "Bored In Chicago" (recently re-released on CD by McGee's own Lizard Family Music imprint), "Cinema East" reappears as a studio recorded version on this album . Perfect Past Tense also includes several other tracks that were previously available only on Bored in Chicago, including "Sleep With Me", "Dress", "Nineteen", "Anything", and "Stain".

"Center of the Earth"

Earwig's latest album "Center of the Earth" is available for purchase from the major retail store, [ [http://www.meijer.com/content/content.jsp?pageName=outside_the_mainstream Meijer: Outside the Mainstream ] ] and available for purchase through [http://phobos.apple.com/WebObjects/MZStore.woa/wa/viewAlbum?id=201194317&s=143441]

The story behind the song "Used Kids"

“The first show I ever played with my first band was at [http://usedkids.com/ Used Kids] . Ron House raved about how he loved the band and thought that we were great. It had an impact on me and I’ve always loved Used Kids,” McGee says. “One night I had a dream. I was at a 7/11 and Ron was working behind the counter. It was a 7/11 but it was Used Kids too. Ron had a big baseball cap with a rebel flag patch on it and kept following me around with a copy of the Weekly World News with the picture of a mushroom cloud that has Jesus’ face in it. Ron was spewing about how he wanted to save my soul and how the world was coming to an end. I got very concerned for Ron’s well-being and eventually asked him if he needed a ride home from the store. His response was ‘Hey man, don’t worry, I got a ride. I’m going home with Jesus tonight!’ I woke up in a strange daze, grabbed a guitar and wrote the song all the way through, pretty much on the first try, in about 10 minutes. It’s a direct re-telling of the dream, blow for blow and a lot of the lyrics are taken verbatim from the dream.” [ [http://www.donewaiting.com/2006/10/11/earwig-the-anti-big-thing/ donewaiting.com » Blog Archive » Earwig, The Anti-Big Thing ] ]

Year of the Drag

Earwig's only DVD released to date, [http://www.lizardfamily.com/order.htm Year of the Drag] , was released in 2005 in between albums Perfect Past Tense and Center of the Earth. Directed, compiled, and edited by Allan Foster, the DVD features eight live performances, including singles "Used Kids" and "Outro". The dvd also contains rare audio tracks, three never before seen videos, and a photo montage which portrays the development of the band.