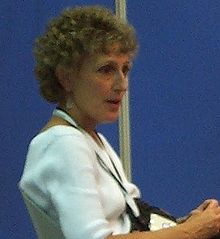 Maxine D. Brown is an American computer scientist and associate director of the Electronic Visualization Laboratory (EVL) at the University of Illinois at Chicago (UIC). Along with Tom DeFanti and Bruce McCormick, she co-edited the 1987 NSF report, Visualization in Scientific Computing, which defined the field of scientific visualization.

Brown holds a B.A. in Mathematics from Temple University and an M.S. in Computer Science from the University of Pennsylvania.

Prior to coming to the University of Illinois at Chicago in 1986, Brown was a professional communications consultant specializing in technical communications for the computer graphics industry. Until October 1983, she was Director of Documentation at Digital Productions. She was formerly with ISSCO Graphics, a leading supplier of data representation graphics software, working in the documentation, development, and marketing areas. She has also worked at Hewlett-Packard, in both their research and development groups and in marketing.[1] In the 1987 she became associate director of the Electronic Visualization Laboratory (EVL) at the University of Illinois at Chicago (UIC), responsible for the funding, documentation, and promotion of its research activities. She works closely with EVL's collaborators at the National Center for Supercomputing Applications (NCSA) at the University of Illinois at Urbana-Champaign and the Mathematics and Computer Science Division at Argonne National Laboratory to coordinate research activities.[2]

Brown has authored numerous articles and papers. A selection:[4][5]