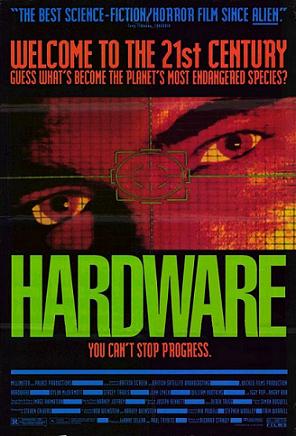 The 21st century world is a as a result of a nuclear war. A travelling scavenger comes across the remains of a named Mark 13 in the desert; He salvages pieces of it. The cyborg head ends up with a metal sculptress, who is unaware of the cyborg's infamy as a governmental killing machine project that was scrapped due to its defects. Mark 13 reconstructs itself utilising household appliances and metal parts, and .

Advertised as "" for the nineties, the film's soundtrack features music from (who, although never seen in the movie, has a cameo role as the radio personality known as "Angry Bob"), (whose lead singer, , has a cameo as a taxi driver), Ministry and . Additionally , the vocalist from played the 'zone tripper' who brings the Mark 13 into human contact, additionally is featured in a music video where plays in the background. The film features excepts from the film directed by . Special effects were provided by Image Animation ("", "Highlander" and "").

M.A.R.K. 13 is a prototype killer combat droid. Its name is a reference to the in the of the , part of which reads "no flesh shall be spared".

The robot, capable of reconstructing itself if damaged in combat, can augment and rebuild its body using nearest available machinery and metal parts. It also comes equipped with an anti-personnel in the form of an injectable cytotoxin, that causes sensory distortion before death. The ultimate purpose of this weapon is to allow the government to commit mass of its own citizens to alleviate .

Its is a faulty insulation system, highly sensitive to and . Although built for fighting in terrain, this huge flaw in the droid caused its governmental project funding to be initially suspended. At the end of the film it is revealed the Mark 13 will enter mass production.

The film is based on a 2000 AD comic called "SHOK! Walter's Robo-Tale". [ [http://www.2000adonline.com/index.php3?zone=thrill&page=thrillviewer&thrill=shok The Shok! strip] , requires (free) registration to view online. (Navigate to "One-off Thrills.")] [ [http://www.britishhorrorfilms.co.uk/shok.shtml Shok!] at British Horror Films.co.uk] In the comic version, the robot head part is recovered from the bloody aftermath of the Saga (almost making Hardware the first movie ever). The original theatrical release did not mention the comic book despite heavily plagiarizing its storyline. Following legal action a notice was added to later versions and the strip's creators, and Kevin O'Neill, now get full writers' credits.

It is now considered to be the first "2000 AD" movie spin-off, followed by the better-known "Judge Dredd". [ [http://www.2000adonline.com/?zone=spinoff&page=films 2000 AD's film adaptations page which includes "Hardware"] ]

* [http://www.everythingisundercontrol.org/nagtloper/write/hwscript.php An early draft of the film's screenplay]