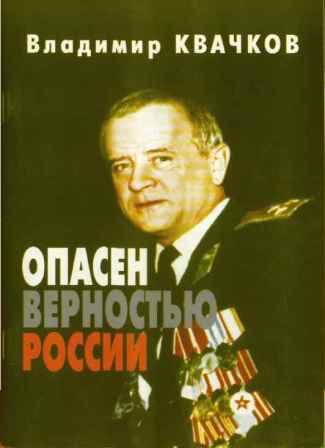 Vladimir Vasilievich Kvachkov ( _ru. Владимир Васильевич Квачков; born ) is an ex- of n service , author and politician. He came to prominence after he was arrested and charged with an attempt to murder Russian politician and businessman . After three years of imprisonment he was acquitted by the court on .

Kvachkov was born to a family of a military officer in the of in , , . He spent his childhood in the town of there his father was transferred soon afterwards

In 1981 Kvachkov served in . In 1983 he was transferred to to lead a of during the . The same year he was ed and had to undergo long medical treatment

In the beginning of 1990ies Kvachkov was a military consultant of the movie Black Shark devoted to helicopter pilots and Spetznaz GRU. In the movie he also played a second plane role of a Spetznaz Colonel

In 1994-1999 Kvachkov worked in . In 1997 Kvachkov and Popovskikh (at that time the Chief of Military Intelligence of the ) organized a scientific conference "Special Operations and the Need to create the Special Forces branch of the Russian Army" (Специальные операции и необходимость создания сил (войск) специального назначения в Вооруженных Силах Российской Федерации). Kvachkov and Popovskikh advocated making spetznaz a arm of service of the . The reform they proposed was not accepted

In 1998 Kvachkov retired from the active military service with a range of a colonel. He started to work as a Senior Researcher (старший научный сотрудник) of the "Center for Military Strategic Research of Russian Defense Ministry" (Центра военно-стратегических исследований Минобороны РФ). He worked on the theory and practice of the modern war. The same year he received the (equivalent to Ph.D) for his dissertation "Развитие форм боевого применения сил и средств специальной разведки в современных условиях" ("Using forces and methods of special intelligence in the modern time"). He prepared a dissertation also devoted to special forces

asserts that during the Kvachkov presented with his plan of an "alternative war". Milošević praised the plan but decided not to escalate the conflict

The assassination attempt on Anatoly Chubais

On Kvachkov was arrested on charges that he was complicit in the attempt to assassinate the head of the and politician . The attempt took part to days earlier on . The armored car carrying Chubais was damaged by a remotely controlled . The damaged car was able to continue moving without stopping while the second car carrying Chubais's bodyguards was shot upon. Allegedly the assassins left the scene in the green Saab car registered to Kvachkov. While the first search of Kvachkov's home found nothing of interest the second search found explosives in Kvachkov's home and . Kvachkov denied his involvement and refused to help the investigation

Soon Kvachkov and two other Spetznaz troopers, and were detained under suspicion of involvement into the assassination. According to the version of the investigators, Vladimir Kvachkov, Naydenov and Yashin as well as Vladimir Kvachkov's son, Alexander Kvachkov and , son of former Minister for Media and Information, Boris Mironov conspired to assassinate Chubais. The version was mostly based on the words of a single witness, Igor Karvatko

In the spring 2006, the court hearings started. The accused maintained that the assassination was staged by Chubais himself. In November-December 2006 Karvatko changed his testimony accusing the investigators in undue pressure and threats. While the lawyers of the plaintiff insisted that Karvatko was pressured by the suspects and their friends, Tatiana Mironova, mother of another suspect, Ivan Mironov, publicly accused investigators in torturing Karvatko. In December 2006 the court was restarted with the new Jury.Finally, after three years of imprisonment Kvachkov, Naydenov and Yashin were acquitted by the court on . [ [http://www.kvachkov.org/info/post_1212688554.html Присяжные вынесли оправдательный вердикт по делу Владимира Квачкова.] ru icon ] [ [http://en.rian.ru/russia/20080605/109342775.html Three men accused of assassination attempt on Chubais acquitted.] ]

After the acquittal of Kvachkov Chubais made statement telling that he has no doubts that Kvachkov was responsible for the assassination. On the other hand he believes that acquittal of the guilty is better than sentencing of innocent [ [http://www.rao-ees.ru/ru/news/news/pr/show.cgi?pr050608ab.htm Заявление Председателя правления РАО "ЕЭС России" Анатолия Чубайса на вердикт присяжных по делу Квачкова и других] ]

After the acquittal Kvachkov said: "now I have a chance to finish what I started." He asserted that Prime Minister is a "" who leads a Western "occupational force" [ [http://www.themoscowtimes.com/article/1016/42/368236.htm The Perfect Orthodox Wahhabi] by , , 11 June 2008 ] . An assassination of Chubais would be a valid military operation against an asset of the . Still he maintained that he did not participate in the assassination and that it was staged by Chubais himself to divert attention from his business problems [ [http://echo.msk.ru/programs/sut/518925-echo/ Kvachkov interview to Echo of Moscow] ru icon ]

The case returned to court again after the prosecution's appeal. The new trial started on , . The next court session has been postponed until October 13 because only 6 out of 500 potential jurors arrived to court on the day the jury selection was scheduled to begin. [cite news|url=http://www.kommersant.ru/doc.aspx?docsid=1033608|title=Colonel's shoulder-straps weigh upon the jurors|date=2008-09-30|publisher=|accessdate=2008-10-03]

On , Kvachkov took 30% and won the second place in the byelections of the deputies at the North-East of . He lost to from the

On , Kvachkov stood for the State Duma again, now in the Medvedkovo district of Moscow. He was not registered as a candidate by the regional Electoral Commission despite him, Naydenov and Yashin keeping a in their prison

Both times, Moscow organization of "Labour Russia" and helped him with his election campaign. [ [http://www.northstarcompass.org/nsc0603/kvachkov.htm Chubais Really Deserved It.] ]

Kvachkov's cell mate at the detention facility was former . [ [http://www.kommersant.com/page.asp?id=607240 Election Campaign in Matrosskaya Tishina Detention Facility.] ] . According to Kvachkov Khodorkovsky is an exception among the oligarchs: "I have not found him intriguing against the state", said Kvachkov

Khodorkovsky also planned to participate in the Duma byelections for the same seat as Kvachkov. [ [http://www.cnn.com/2005/WORLD/europe/08/31/russia.khodorkovsky Khodorkovsky to stand for Dumas] , "CNN", , . Accessed , .] His plan was based on the legal loophole: a convicted felon cannot vote or stand for a parliament, but if his case is lodged with the he still has all the electoral rights. Unexpectedly it took only a couple of weeks to process Khodorkovsky's appeal, invalidating any of his electoral plans until the end of his sentence.