The Česká filharmonie (Czech Philharmonic) is a symphony orchestra based in Prague and is the best-known and most respected orchestra in the Czech Republic.[1]

The name "Czech Philharmonic Orchestra" appeared for the first time in 1894, as the title of the orchestra of the Prague National Theatre.[1] It played its first concert under its current name on January 4, 1896 when Antonín Dvořák conducted his own compositions, but it did not become fully independent from the opera until 1901. The first representative concert took place on October 15, 1901 conducted by Ludvík Čelanský, the first artistic director of the orchestra.[1] In 1908, Gustav Mahler led the orchestra in the world premiere of his Symphony No. 7. The orchestra first became internationally known under the baton of Václav Talich, who was principal conductor from 1919 to 1931, and again from 1933 to 1941. In 1941 Talich together with Czech Philharmonic made a controversial journey to Germany, where they performed the cycle of symphonic poems My Country by Bedřich Smetana. The concert was enforced by the German offices.[1]

The Czech Philharmonic's first phonograph recording dates from 1929, when Václav Talich recorded the Smetana´s My Country for His Master's Voice. 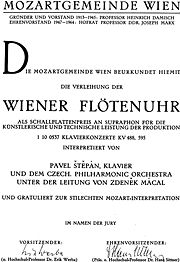 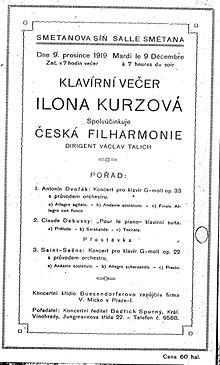