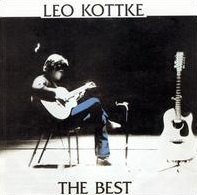 "The Best" is a compilation of American guitarist 's releases on the Capitol label. The liner notes were written by .

*All songs by Leo Kottke except as noted.
*The four original records were labeled, in order, "Acoustic", "Electric", "Live", and "Singing"
*All songs taken from "Mudlark", "Greenhouse", "Ice Water", "My Feet are Smiling", "Dreams and All That Stuff", and "Chewing Pine"
*The 1996 CD release included two discs.