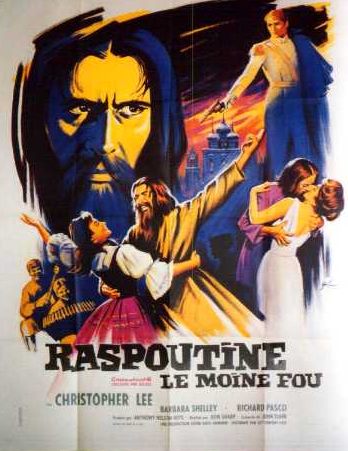 It stars as , the n -mystic notable for gaining great influence with the prior to the Russian Revolution. It also stars , , , , and . The story is largely fictionalized, although some of the events leading up to Rasputin's assassination are very loosely based on Prince Yusupov's account of the story. For legal reasons, the character of Yusupov was replaced by Ivan (Matthews).

The emphasis is on Rasputin's terrifying powers both to work magic and to seduce women.

The story begins in the Russian countryside, where Rasputin heals the sick wife of an innkeeper (). When he is later hauled before an Orthodox for his sexual immorality and violence, the innkeeper springs to the monk's defence. Rasputin protests that he is sexually immoral because he likes to give God "sins worth forgiving". He also claims to have healing powers in his hands, and is unperturbed by the bishop's accusation that his power is from .

Rasputin heads for Moscow, where he forces his way into the home of Dr Zargo (Pasco), from where he begins his campaign to gain influence over the Tsarina (Asherson). He manipulates the Tsarina's lady-in-waiting, Sonia (Shelley), whom he uses to satisfy his voracious sexual appetite and gain access to the Tsarina.

However, Rasputin's ruthless pursuit of wealth and prestige, and increasing control over the royal household attracts opposition. Sonia's brother, Peter (Landen), enraged by Rasputin's seduction of his sister, enlists the help of Ivan to bring about the monk's downfall.

*This was filmed back-to-back in 1965 with "", using the same sets at Hammer's .
*The original ending had the lifeless Rasputin lying on the ice with his hands held up to his forehead in . However, it was considered controversial for religious reasons, and was removed. Stills of the original ending still exist.
*As a child in the 1920s, Lee had actually met .
*The script was novelized by as part of his "" paperback in 1967.