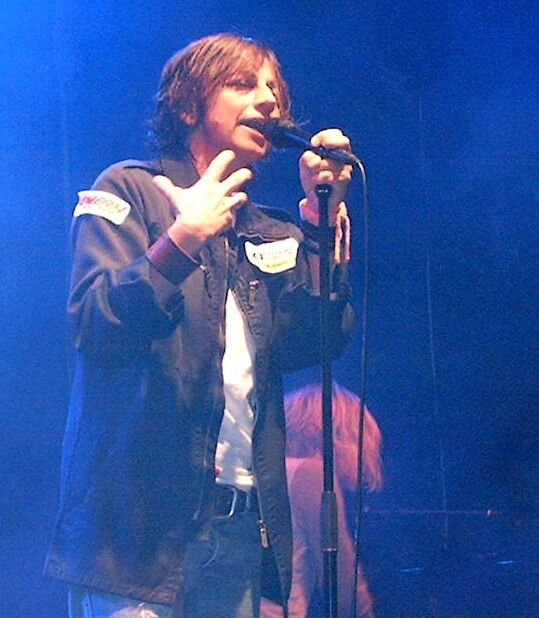 Gianna Nannini (born , ) is an Italian female and rock musician.

Born in as former driver 's older sister, she studied in and then composition in .

Her first hit was in 1979 with the single "America" and the album "California", which became a success in several European countries. The rise to fame in Italy started in 1984 with the release of her sixth album, "Puzzle". This album peaked in the top 10 at the Italian, German, Austrian and Swiss hit-parades. She sang for the videoclip "" (directed by ), won several musical awards and started a European tour, including a participation at the . In 1986 her hit "Bello e impossibile" was a huge success and brought her more awards in Italy, , and . Her 1987 compilation "" sold over a million copies.

In 1990 she sang "Un'estate italiana", the official song of the , together with .

She graduated in philosophy from the in 1994. The following year she took part in a protest organized by at the French embassy in against the decision of the French government to pursue nuclear experiments at .

In 2004 she released a kind of Greatest Hits compilation, but the songs were all rerecorded for the occasion. The cd "Perle" contains a number of her former hits in new arrangements. As backup-musicians there is Christian Lohr on piano (who also is co-producer), and a stringquartet: Vincenzo di Donna (first violin), Luigi de Maio (second violin), Gerardo Morrone (viola), Antonio di Franca (violoncello). This brings a new dimension to the familiar Gianna melodies. With this orchestra Gianna went on a "Perle-tour" in central Europe during 2004-2005.

An album "Grazie" was released in February 2006, and has peaked at number one of the Italian hit-parade with the single "Sei nell'anima". During summer of 2006 she toured Grazie all over Italy. "IO" another track from the cd became a big hit.

In September 2006 she recorded a duet with Andrea Bocelli. "Ama Credi E Vai" is released as cd-single.

She was also featured on member Alexander Hacke's solo album Sanctuary, on the track "Per Sempre Butterfly".

In April 2007 she released "Pia come la canto io", a collection of songs written for a pop opera that will be performed in 2008. This work has been eleven years in the making, and is based on the mediaeval Tuscan character (mentioned briefly in ). The album was produced by , who also produced "Grazie".

An acoustic version of her song "Meravigliosa Creatura" (from "Perle") has been used in a 2008 advertisement spot for the Bravo directed by Matthias Zentner. The song and the spot have achieved such a succest to take "Perle" to the Italian top 50 in sales, and Fiat would later include a Gianna Nannini song in another Fiat Bravo ad.

In 2008 she also duetted with -an italian rapper- in his videoclip version of the song "In Italia".

She also sang the song "Aria" with Tose Proeski.