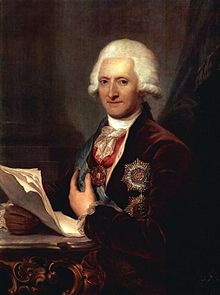 Count Jacob Sievers (August 30th, 1731 in Wesenberg [now Rakvere, Estonia] - July 23rd, 1808 in Bauenhof, Governorate of Livonia [near what is now Valmiera, Latvia]) was a Russian statesman and a reformer of the empire.

After serving the Russian army during the Seven Years' War as quartermaster general, Catharine II appointed him governor of Novgorod in 1764. He introduced the cultivation of potatoes to Russia, regulated the postal services, and was instrumental in the abolition of torture in 1767.

Based on Sievers' initiative, the provincial government reform was instituted; he was himself appointed general governor of Novgorod, Tver and Pskov. He was Russian ambassador to Poland and led the second and third partition of the kingdom. Czar Paul appointed him senator in 1796; in 1797 he became head of the new department for water communications. He was knighted in 1798.

In Sievers' honor, Alexander I named the channel that connects the outlet of the Msta river with the Volkhov river the Sievers channel.