The concept of the neighbourhood unit, crystallised from the prevailing social and intellectual attitudes of the early 1900s by Clarence Perry, is an early diagrammatic planning model for residential development in metropolitan areas.[1] It was designed by Perry to act as a framework for urban planners attempting to design functional, self-contained and desirable neighbourhoods in the early 20th century in industrialising cities.[2] It continues to be utilised (albeit in progressive and adapted ways, see New Urbanism), as a means of ordering and organising new residential communities in a way which satisfies contemporary "social, administrative and service requirements for satisfactory urban existence".[1]

Clarence Perry’s conceptualisation of the neighbourhood unit evolved out of an earlier idea of his, to provide a planning formula for the arrangement and distribution of playgrounds in the New York region.[2] The necessity for a formula such as this was attributed to the rise of the auto-mobile in the early 20th century. During a period where road sense had not yet amalgamated with the social conscious, and many of the urban tools we now use to manage the threat posed by vehicular traffic did not exist, or were not in abundance (such as pedestrian crossings, traffic lights and road signs), developing cities such as New York, which embraced the motor car, suffered street fatality rates in excess of one child a day.[2]

Clarence Perry conceived of neighbourhoods in this time period as islands locked amidst a burgeoning sea of vehicular traffic, a dangerous obstacle which prevented children (and adults) from safely walking to nearby playgrounds and amenities.[2] Perry's neighbourhood unit concept began as a means of combating this obstacle. Ultimately, however, it evolved to serve a much broader purpose, of providing a discernible identity for the concept of the "neighborhood", and of offering to designers a framework for disseminating the city into smaller subareas (suburbs).[1][3]

While there is evidence that the concept of the neighbourhood unit emerged as early as 1923, at a joint meeting of the National Community Center Association and the American Sociological Society in Washington, D.C., it was the publication of Clarence Perry’s paper, in the 1929 Regional Plan of New York and Its Environs, which led to its promotion as a planning tool.[3] Titled, “The Neighborhood Unit, a Scheme for Arrangement for the Family-Life Community”, Clarence Perry’s monograph offered in concrete terms a diagrammatic model of the ideal layout for a neighborhood of a specified population size. This model provided specific guidelines for the spatial distribution of residences, community services, streets and businesses.[1]

Perry’s concept of the neighbourhood unit employed a variety of institutional, social and physical design principles, influenced by such popular notions in the 1920s as the separation of vehicular and pedestrian traffic, and arterial boundaries demarcating the inwardly focused neighbourhood cell from the greater urban lattice.[1][3] The cellular nature of the neighbourhood unit allowed it to be utilised as a building block in the development of neighbourhood arrays, leading to its systematic modular usage during periods of rapid residential expansion in many countries across the globe.[4]

William E. Drummond - a central architect in Frank Lloyd Wright’s studio between 1899-1909 - defined the ‘Neighbourhood Unit’ within his submission to the Chicago City Club’s planning competition of 1912.[7] The competition wanted to address, “the theoretical and practical parameters, social and physical, of a micro-community in a suburban context with a focus on housing; the second concerned a community centre”,[7] calling for proposals for a ‘quarter-section’ site south of central Chicago.[7] Drummond’s plan advocated for the neighbourhood unit to be the organising basis of the whole city; to be ‘regarded as a unit in the social and political structure of the city’.[7]

The competition was largely a reaction to the squalid urban living conditions in the early part of the twentieth-century. It was part of the larger progressive and reformist era in American politics. Progressives saw the slums as a consequence of corruption and exploitation which they believed could be overcome through local political activation.[7] Drummond was influenced by notable sociologist Charles Cooley, who he credited and surmised in his submission saying, ‘in the social and political organization of the city [the neighbourhood] is the smallest local unit’.[7] These sociological and political foundations are interesting when considered against the various applications and permeations of neighbourhood planning (see Urban Application).

The neighbourhood unit was conceived of as a comprehensive physical planning tool, to be utilised for designing self-contained residential neighbourhoods which promoted a community centric lifestyle, away from the "noise of the trains, and out of sight of the smoke and ugliness of industrial plants" emblematic of an industrialising New York City in the early 1900s.[2][8] 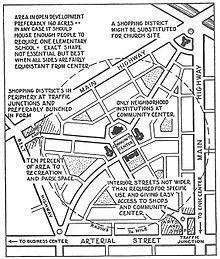 A diagram of Clarence Perry's neighbourhood unit, illustrating the spatiality of the core principles of the concept, from the New York Regional Survey, Vol 7. 1929

"Centre the school in the neighbourhood so that a child's walk to school was only about one-quarter of a mile and no more than one half mile and could be achieved without crossing a major arterial street. Size the neighbourhood to sufficiently support a school, between 5,000 to 9,000 residents, approximately 160 acres at a density of ten units per acre. Implement a wider use of the school facilities for neighbourhood meetings and activities, constructing a large play area around the building for use by the entire community.

Place arterial streets along the perimeter so that they define and distinguish the “place” of the neighborhood and by design eliminate unwanted through-traffic from the neighborhood. In this way, major arterials define the neighborhood, rather than divide it through its heart.

Design internal streets using a hierarchy that easily distinguishes local streets from arterial streets, using curvilinear street design for both safety and aesthetic purposes. Streets, by design, would discourage unwanted through traffic and enhance the safety of pedestrians.

Restrict local shopping areas to the perimeter or perhaps to the main entrance of the neighborhood, thus excluding nonlocal traffic destined for these commercial uses that might intrude on the neighborhood.

Dedicate at least 10 percent of the neighborhood land area to parks and open space, creating places for play and community interaction" [2]

The neighbourhood unit was embraced for its community idealism, and many of the public sectors in those countries which were exposed to the theorem have since adopted its purpose; of protecting and promoting the public health and of considering the safety and welfare of citizens.[1] Furthermore, private developers and investors continue to construct and fund planned communities based upon many of the concepts tenets, due to consumer demand for the idealistic community intimacy associated with living with heteronormative homo reciprocans of similar socioeconomic status.[4] These attractive qualities of the concept of the neighbourhood unit are referred to by Allaire, "as reflecting a nostalgia for rural living".[4]

Mumford observes a bidirectional relationship between the neighbourhood unit realtor’s residential subdivision model.[5] It should be noted that Clarence Perry in fact resided within Forest Hills Gardens at the time he presented his treatise on neighbourhoods 1923.[7] While spatial elements of ‘neighbourhoods’ such as Forest Hills Gardens or Westwood Highlands are in keeping with those championed by reformers and progressive planners, these suburbs do not have common ideological origins. Instead realtors playing the role of ‘community builder’ had quite insidious consequences for ideas about public space, community inclusion and political agency.

The use of deed restrictions by neighbourhood corporations wanting to control undesirable externalities in the early 1900s (and beyond) has been linked to ongoing racial segregation in the United States.[9] The use of the ‘neighbourhood unit’ in this way emphasises exclusion rather than inclusion as initially intended. Traces of the exclusion remain evident within the streetscape of neighbourhoods such as Forest Hill Gardens with signs delineating the ownership of commonly considered public space. In contemporary Melbourne, Australia, the Owners Corporations Act 2006 enables access restrictions upon facilities generally considered public. Western Leisure Management makes this explicit on their website relating to use of facilities within the ‘un-gated’ neighbourhoods they manage; “These estates are part of an Owners Corporation and the facilities within are accessible by Residents Only and are not open to the general public.”[10]

The concept of the neighbourhood unit historically correspond to activities of American wave of school of urban studies and ecology called Chicago school, operating mostly in the 1920s and 1930s. It is closely linked to activities of Jane Jacobs, American urbanist and humanist in the field of migrant integration and child labour force.

The concept of the neighbourhood unit should have enhanced the feeling of identification with the environment for the incomers, support their spatial integration, foster social cohesion and avoid social pathology, taking the form of alienation and civic indifference.

In the late 1940s the neighbourhood unit concept came under attack from Reginald Isaacs, then Director of Planning for Michael Reese Hospital in Chicago. Isaacs believed that the overwhelming endorsement of the neighbourhood unit, as a “panacea for all urban ills”, was misguided; suggesting that the mystical powers ascribed to the concept by its most enthusiastic adherents engendered a dangerously sectarian discourse surrounding its application.[4]

Isaac’s argument became a rallying point for the collective opposition of the neighbourhood unit, as planners began to question the unintended consequences of its repeated use, its socially divisive nature and its emphasis on the physical environment as the soul determinant of wellbeing. In developed countries across the globe, the spread of urban systems which embrace obsolete or impractical uses of space in order to manifest a synthetic ‘rural’ community lifestyle is increasingly viewed as blight upon attempts to achieve sustainable metropolitan growth.[1][4]

In the past, Isaac’s argument was weakened through its inability to provide an alternative framework for community planning, in the present, planning bodies internationally, both private and public as of 2009, continue to adapt and make modular use of the neighbourhood unit when planning new communities. It is becoming increasingly difficult however, to mask the problems associated with the continued and ubiquitous use of variations on this model, and Urban Sprawl is proving to be one such problematic consequence of this usage facing many developed cities.[11] It is becoming increasingly apparent that a rethinking of the current heteronormative approach to planning new communities on the urban fringe, or in the redevelopment of existing neighbourhoods, is required to meet density goals and forge sustainable growth.[11]