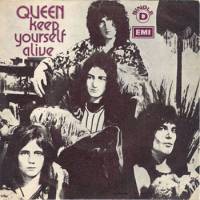 Artist = Queen
B-side=
from Album = Queen
Released = ,
Format = 7"
[ Recorded = ]
Genre =
Length = 3:45
Label = flagicon|GBR , flagicon|USA Elektra
Writer =
Producer = , and Queen
Chart position =
[ Reviews = ] *
Last single =
This single = "Keep Yourself Alive"
(1973)
Next single = "Liar"
(1974)"Keep Yourself Alive" is the first track on the English rock group Queen's debut album, written by . It was released as Queen's first single along with another song from the album, "". The album reached #24 on the UK charts, where it remained for 18 weeks. While the single failed to chart anywhere, it helped establish Queen's large fan base in Japan.

Brian May wrote it when the band had already been formed, but before joined (that's known thanks to Barry Mitchell, a former bassist of the band). According to what May said in a radio special about their 1977 album "News of the World", he had penned the lyrics thinking of them as ironic and tongue-in-cheek, but their sense was completely changed when sang them.

It's been suggested by some fans and Queen scholars that Mercury could have helped on the musical songwriting, based on the fact that (as it's been recalled by former bassists and the band themselves) they were in a more collaborative period in the pre-studio days and Mercury was usually the one getting his way with structural ideas. While it's highly possible that he contributed ideas to the song (the modulation types and the expanded form are closer to his style than May's), the bottom line is that even in that case Mercury would be more a co-arranger than a co-writer per se (like on ' songs).

The newly-formed Queen quickly added "Keep Yourself Alive" to the live set. Mercury commented that the song "was a very good way of telling people what Queen was about in those days" (RAM, 21 May 1976, p 17). Indeed, the number included a drum solo by Roger Taylor and one line sung/spoken by him.

"Keep Yourself Alive" was part of the band's live set until the early 1980s. On the 1980 and 1981 tours, the band would play an improvisational jam before the start of the song then after the drum solo, it would morph into Taylor's tympani drum solo followed by May's echo-plexed guitar solo spot before either segueing into the "Brighton Rock" finale or a drum and guitar climax or segued into a "Flash Gordon" medley (which consisted of "Battle Theme"/"Flash's Theme"/"The Hero"). The band would not play it again until 1984 on "The Works" tour as part of a medley of old songs (with "Somebody to Love", "Killer Queen", "", and "Liar").

On an interesting note, in live performances, Mercury would often sing the line "all you people keep yourself alive" (which is sung only two times in the studio version) in place of the more-repeated line "it'll take you all your time and a money honey you'll survive".

The first version of "Keep Yourself Alive" is from summer 1971 at De Lane Lea Studios. It was produced by Louie Austin and includes the intro played on Brian May's Hairfred acoustic guitar. All of the song elements were already present, including call-and-response vocals by Freddie Mercury (verses) and during the break, where Roger Taylor sang a line and Mercury answered it. This demo version remains Brian May's favourite take of the song.

Subsequently they did several attempts to "recapture the magic" when they went on to do the "real" version at Trident Studios. The one mixed by Mike Stone was the only one moderately accepted, and it's the one released as single. It includes Freddie Mercury doing all of the harmony vocals in the chorus (multi-tracking himself) and Brian May singing the "two steps nearer to my grave" line instead of Mercury (who did it live and in earlier versions). This recording does not use acoustic guitar; the printed transcription on EMI Music Publishing's "Off the Record"' sheet music lists at least seven electric guitar parts, one of which uses a prominent phasing effect. It can also be noted that this recording includes the line "Come on and get it, get it, get it boy, keep yourself alive," which was not in the original version.

* covered the song in and released it as a single under the name ".

* British heavy metal band often plays the opening guitar riff of this song in the middle of live performances of "Sanctuary."

*The song can be heard playing towards the end of a episode entitled .