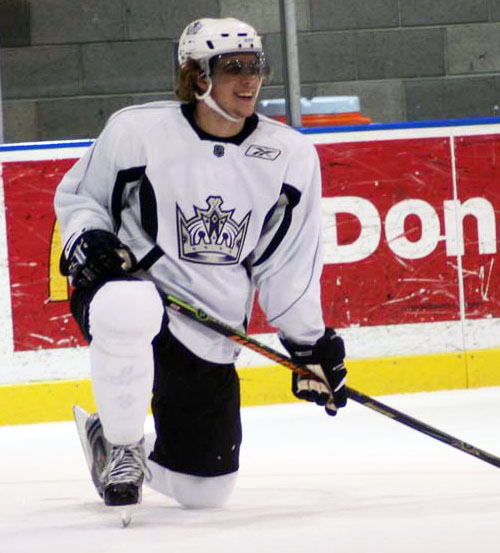 Anže Kopitar (born August 24 1987) is a n professional player who currently plays for the of the . He was the 11th overall draft pick by the Los Angeles Kings in the . Kopitar is the first Slovenian player to appear in the NHL.

Kopitar developed his skills in 's senior and junior leagues. In 2004, at 16-years-old, he moved to to play for of the . After his first season in Sweden, he was chosen 11th overall by the in the . Upon being drafted, he was invited to the Kings' rookie camp, but chose to remain in Sweden with Södertälje SK. Kopitar was given another opportunity to play in North America when the of the extended him an invitation. He declined, hoping to further his development by continuing to play against professionals in the Elitserien than juniors in the WHL. [citeweb|title=Kings' Anze Kopitar grew up fast|url=http://www.latimes.com/sports/printedition/la-sp-kings11-2008oct11,0,2328440.story|accessdate=2008-10-11|publisher=]

In 2006, he accepted an invitation to the Los Angeles Kings' rookie camp. Anže Kopitar became the first n hockey player to play in the NHL when he made his career debut on at the against the . He scored two goals as the Kings lost 4-3.

The following season, Kopitar was selected to represent the Western Conference at the 56th NHL All-Star Game, his first appearance.

On , , Kopitar signed a seven-year, $47.6 million contract extension with the Kings.

Kopitar was born in Jesenice which was within Yugoslavia at the time of his birth. His family lived in Hrušica at that time. His father Matjaž is a retired hockey player and coached Slovenian champions Acroni Jesenice of the , while his younger brother Gašper Kopitar currently plays for the LA Junior Kings Midget AAA 16U Team.