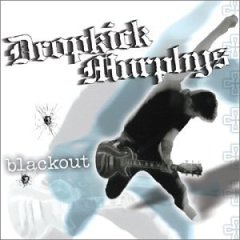 "Blackout" is the fourth studio album from , released in 2003. It was released with a DVD, which contained live videos for "Rocky Road to Dublin" and "Boys on the Dock", a music video for "Gonna Be a Blackout Tonight", and a trailer for their then upcoming untitled full-length DVD, which became "".

The album was released in a condensed format on 10" vinyl. It had 5 songs from the album as well as a cover of 's "" which was later released on "". The band filmed music videos for "Walk Away" and "Gonna Be A Blackout Tonight".

All songs by unless otherwise noted

"Walk Away (European release only)"

"The Fields of Athenry (Limited to 600 copies)"

"The Fields of Athenry Promo (Given away at Soccer match in Glasgow, Scotland)"