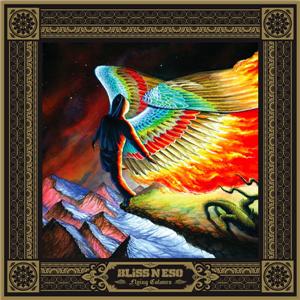 "Flying Colours" is the third album by n hip hop group . It was released by Illusive Sounds on April 26, 2008.

The album was recorded in three different continents over twelve months, and features Illmaculate (World freestyle and Scribble Jam champion), a 20 piece African Choir (The Zulu Connections Choir), Debaser (US), and Phrase. In an interview with newspaper Jonathan Notley (Bliss) explained that the band's previous albums were recorded on the fly, in sporadic periods whenever they could score some studio time, whereas with Flying Colours, the Sydneysiders relocated to Melbourne for three months of dedicated writing and recording at Richmond's Sing Sing Studios

"We decided to get out of Sydney and go somewhere where we could get up every day and just focus on making the record. It was great. We weren't worried about the pressure of what people would think, or forcing it or trying to make hits" - Notley

The cover of the album features artwork by tattoo artist, Steve Cross from Melbourne. It depicts a man with blazing coloured wings leaping off a cliff.

"With this album we wanted to do something a bit different than just pictures of us. We kinda wanted to go a little bit more creative and imaginative. We thought of this concept of this guy like leaping off this cliff with these flaming colourful wings, and it kind of really worked with the context of this album and obviously the title." - Notely

The first single from the album, a reworking of Citizen Cope’s "Bullet and a Target", gained major national commercial radio and television airplay. "Flying Colours" features production from Bliss, M-Phazes and Hattori Hanzo, the album was mixed at Sing Sing Studios (Melbourne) by Noam Dishon and Andy Baldwin (, , ).

In an interview with Xpress magazine Notley indicated their suprise at the albums success.

"To tell you the truth it smashed any of my expectations. The reception for the record has been fantastic so we couldn't really be happier at the moment." - Notley

All songs written by Jonathon Notley, Max MacKinnon and Noam Dishon, except where noted [ [http://www.apra.com.au/site/public/searchworks.stm APRA database] at the website (search each song title)]