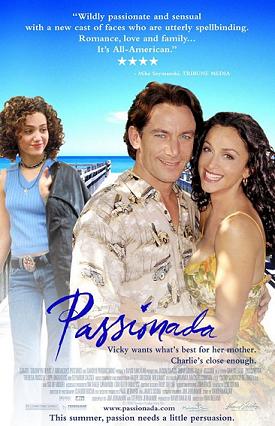 "Passionada" is a . It is directed by and stars , and , co-starring and . The story is by , and the is by and . The film is set in , a formerly wealthy port town with a sizable population of Portuguese descent.

Celia Amonte () is a who lives in with her daughter Vicky (). The broke British card counter Charles "Charlie" Beck () arrives in town to stay with and mooch off some wealthy friends and gamble at the local . The friends are Daniel Vargas () and his wife Lois Vargas (). One night, dining at a Portuguese restaurant with Lois, Charlie sees Celia singing , a haunting Portuguese form of song. He is enchanted with her, approaches her, and is rebuffed. Charlie later finds Celia's address in the phone book and goes to her house, where he encounters Vicky, whom he had met at the casino before. Vicky agrees to help Charlie woo her mother in exchange for lessons on card counting. This proves difficult, as Celia still longs for her deceased husband and has not dated since his death.