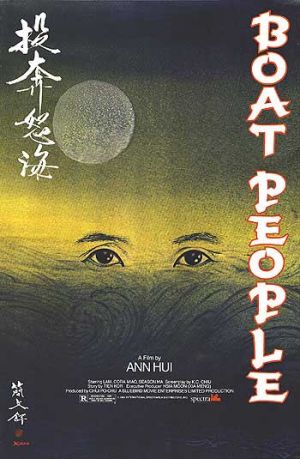 "Boat People" (Chinese: 投奔怒海, "Tau ban no hoi", literally: "Run Towards the Angry Sea") is an awards-winning film directed by , first shown in theaters in 1982. The film starred , , , and . At the second , "Boat People" won the Best Film, Best Director, Best New Performer, Best Screenplay, and Best Art Direction categories and was one of the official selections at the in 1983. In 2005, at the 24th Hong Kong Film Awards, "Boat People" was ranked 8th in the list of 103 best Chinese-language films in the past 100 years. [zh cite web
url=http://www.hkfaa.com/news/100films.html
title=The Best 100 Chinese Motion Pictures
date=2005
accessdate=2008-04-16
author=Hong Kong Film Awards Association]

"Boat People" was the last film in Hui's "Vietnam trilogy". It recounts the plight of the Vietnamese people after the communist takeover following the ending the .

In the late 1970s, a great number of Vietnamese refugees flooded Hong Kong. In 1979, Hui was making the documentary "A Boy from Vietnam" for the network. In the process of making the film, she collected many interviews conducted with Vietnamese refugees about life in following the . [Berry p. 427] From these interviews, she directed "" (1981) starring as Woo Viet, a Vietnamese boat person in Hong Kong, and "Boat People".

The , just ending a war with Vietnam, gave Hui permission to film on Hainan Island.

*Shiomi Akutagawa (): a Japanese photojournalist who returns to Vietnam to report about life after the war
*Cam Nuong (): 14-year-old girl that Akutagawa meets in
*To Minh (): a young man who hopes to leave the country, sent to the
*Officer Nguyen (): a French-educated Vietnamese official who gave half his life to the revolution; disillusioned with life after the war
*Nguyen's mistress (): a Chinese woman who is involved with black-market trade, and a contact for people seeking to leave the country, secretly having an affair with To Minh

The film is shown through the point of view of a Japanese photojournalist named Shiomi Akutagawa (Lam). Three years after covering during the communist takeover, Akutagawa was invited back to Vietnam to report on life after the war. He was guided by a government minder to a New Economic Zone near Danang and was shown a group of schoolchildren happily playing, singing songs praising .

The scene that he saw was actually staged to deceive the foreign press. In Danang, he witnessed a fire and was beaten by the police for taking photos without permission. He also saw the police beating up a "". Later he saw a family being forced to leave the city to a New Economic Zone and wondered why they would not want to go there, recalling the happy children that he saw.

In the city, he met Cam Nuong (Ma) and her family. Her mother secretly works as a prostitute to raise her children. She has two younger brothers, the older one, Nhac, is a street-smart boy who is conversant in American slang, while the younger boy, Lang, was fathered by a Korean that her mother serviced. From Cam Nuong, Akutagawa learns the grisly details of life under communism in Danang, including children searching for valuables in freshly-executed corpses in the "chicken farm". One day, Nhac found an while scavenging in the garbage and was killed.

At the "chicken farm", Akutagawa met To Minh (Lau), a young man who was just released from the New Economic Zone. After To Minh attempted to rob Akutagawa's camera, he was tried and re-sent to the New Economic Zone. Akutagawa used his connections with an official to follow him there. At the New Economic Zone, he witnessed the inmates being mistreated. He returned to the location where the smiling children were singing for him earlier, and found to his horror them sleeping unclothed in overcrowded barracks.

Meanwhile, To Minh had a plan to escape the country with a friend named Thanh. However, while on duty dismantling landmines one day, Thanh was blown up. To Minh got on the boat to flee the country alone, but he was set up. The Coast Guard was waiting for them and shot indiscriminately into the boat, killing all on board then taking all the valuables.

Cam Nuong's mother was arrested for prostitution and forced to confess publicly. She committed suicide by impaling herself with a hook. Akutagawa decided to sell his camera to help Cam Nuong and her brother leave the country. On the night of the ship's departure, Akutagawa helped them by carrying a container of diesel. However, they were discovered and he was shot at. The diesel container blew up, burning Akutagawa to death. The film ends with Cam Nuong and her brother safely on the boat, looking forward to a new life at a freer place.

"Boat People" was nominated for 12 awards at the second and won 5, including Best Film and Best Director. [zh cite web
url=http://www.hkfaa.com/history/list_02.html
author=Hong Kong Film Awards Association
title=第二屆香港電影金像獎得獎名單
accessdate=2008-04-17] In 2005, it was ranked 8th of 103 best Chinese-language films in the past 100 years in a ceremony commemorating 100 years since the birth of Chinese-language cinema. The list was selected by 101 filmakers, critics, and scholars.

Hui considers "Boat People" one of her favorite movies

The film was also shown in many international film festivals, including the . Many international critics found the film powerful, including in "", Lawrence O'Toole in "", and David Denby in "". At the , it elicited unusual attention because of its perceived political content (unlike the usual Hong Kong films that Western audiences were accustomed to) and high production value.

However, many critics at the New York Film Festival criticized the film's political content, such as , , and , all writing in "". They objected to what they saw as the one-sided portrayal of the Vietnamese government and the lack of historical perspective. Some others found it politically simplistic and sentimental.

Because the film was produced with the full cooperation of the government of the , a government that had recently fought a war with Vietnam, many see it as anti-Vietnam propaganda despite Hui's protestations. "The New York Times" wrote that the film's harsh view of life in communist Vietnam was not unexpected, given Chinese government's emnity to the Vietnamese. Hui emphasized her decision to depict the suffering of Vietnamese refugees based on extensive interviews she conducted in Hong Kong. She insisted that the Chinese government never requested that she change the film's content to propagandize against Vietnam, and that they only told her that "the script had to be as factually accurate as possible."

At the Cannes Film Festival, some left-wing sympathizers protested against the film's inclusion, and it was dropped from the main competition. This was reportedly done at the behest of the French government, seeking to solidify its relations with the Socialist Republic of Vietnam.

In Taiwan, the film, along with all of Hui's other work, was banned because it was filmed on Hainan, an island in the People's Republic of China.

*While Vietnamese people normally address each other by their given names, even in formal situations, the characters in "Boat People" address each other using surnames.
*The film's English title is misleading; "Boat People" does not tell the story of , it instead tells the plight of Vietnamese people under communist rule, the reason causing them to become boat people. The Chinese title, literally meaning "Run Towards the Angry Sea", more accurately describes the film's content.
*All the characters in the film speak Cantonese instead of Vietnamese, but Vietnamese is used in written text and when characters sing.