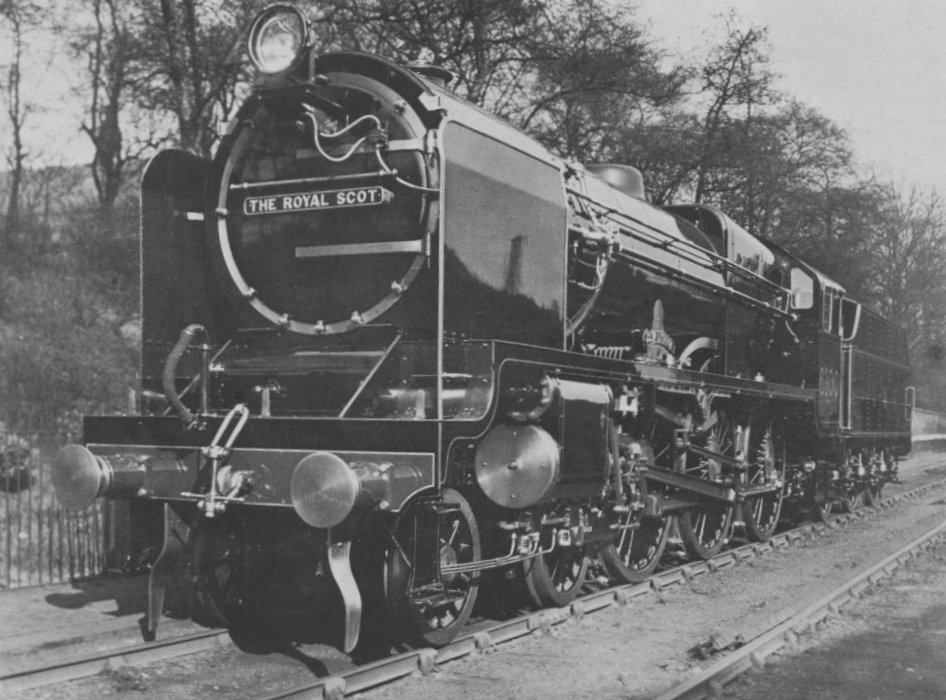 caption = Parallel boilered 6100 "Royal Scot" poses for the official photograph after preparation for its North American tour, 1933.|The (LMS) Royal Scot Class is a class of express passenger locomotive introduced in 1927. Originally having parallel boilers, all members were later rebuilt with tapered type 2A boilers, and were in effect two classes.

By the mid-1920s the LMS had followed the 's small engine policy that meant that it had no locomotives of sufficient power for its expresses on the . Trains were entrusted to LMS/MR Midland Compounds s, the and the L&YR Dreadnought s. Construction of 50 of a new class of was authorised from the in Glasgow, and they were introduced without testing, the design being based on the ; although Radford claims that the boiler owed much to the 'Big Bertha'. A further 20 were built by .

They were initially named after Regiments and some after historical LNWR locomotives, though those were renamed in 1935/6 to take more names of regiments.

From late 1931, after several bizarre forms were tried on various locomotives, the straight sided were added to stop drifting smoke; these were later replaced by angled-top items. From 1933 the class were taken off the top-link expresses, being superseded by the and later the pacifics.

In 1933 one locomotive was sent to on a tour, 6152 swapping identities with 6100 "The Royal Scot", the identities never being swapped back after its return.

of 1929 was an unsuccessful experimental prototype locomotive based on the Royal Scot. It was rebuilt by in 1935 to become 6170 "British Legion". This served as the blueprint for later rebuilding.

In 1942 the LMS rebuilt two locomotives with type 2A boilers, but later turned to the Royal Scots. Most of these however turned out to be s - in effect new locomotives but rebuilding was more easily justified in the eyes of accountants. Initially these too were built without smoke deflectors but later acquired them.

The class title of "Royal Scot" was subsequently re-used in 1976 as an official name for the then-new Class 87s but it never stuck, partly out of respect for the original fleet.

Note: Built below refers to the 'LMS build date'.

This class forms the basis for the in .

Mainline produced No. 6100 "Royal Scot" as a 00 model. Bachmann took over the tooling for the locomotive, and produced it for some time, with the ultimate intention of re-tooling the design to incorporate their own higher level of detail, but unfortunately Hornby beat them to it, and produced their own Rebuilt Scots, these being introduced in 2007, along with the rebuilt patriot locomotives.Brassmasters do a limited edition kit in 4mm.