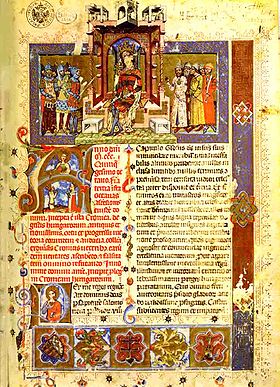 The first page of the Chronicon Pictum.

Chronica Hungarorum (Chronicle of the Hungarians) is the title of several works treating the early Hungarian history.

The most famous of the variants is the Vienna Illuminated Chronicle, i.e. the Chronicon Pictum (1358–1370, ed. S. Ladislaus Endlicher 1827)), deriving the name from its magnificent illustrations and the fact that it was kept in the Viennese Imperial Library.

A popular chronicle partly based on the Chronicon Pictum (entitled just Chronica Hungarorum) was circulated in a printed form. It is also known as the Buda Chronicle. It was produced in 1473 by András Hess and is the first incunabulum ever printed in Hungary (Buda, András Hess, 1473, 70 fol., 2º.)

It relates the history of Hungary from the earliest times to the coronation of King Matthias. Eleven copies of the chronicle are known to survive, two of them in Hungary: one in the National Széchényi Library and another in the Budapest University Library.

This work (Brno, 1488, Augusburg, 1488) presents events as seen by an educated nobleman. The chronicle is described in the article on the author.