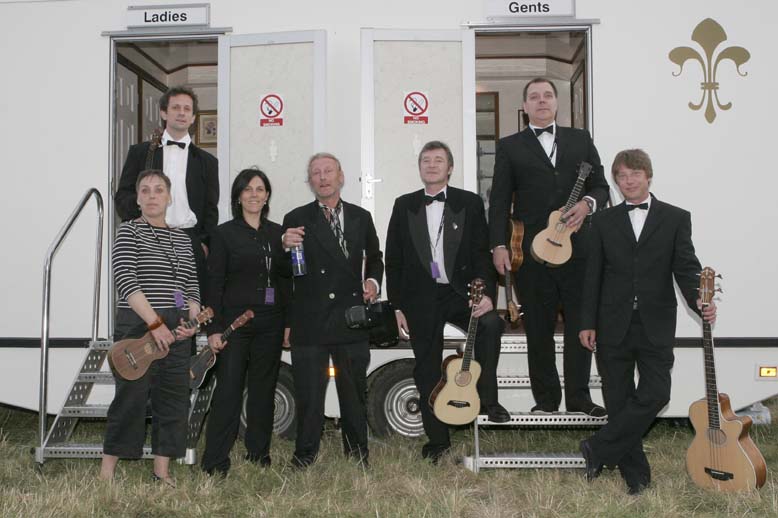 Listen
filename=Good Bad Ugly theme - Ukulele Orchestra GB.ogg
title=Theme to "The Good, The Bad and The Ugly"
description=Sample of the Ukulele Orchestra of Great Britain playing the main theme of the Film.
format=

The Ukulele Orchestra of Great Britain is a musical ensemble featuring s in different registers and an (although the orchestra prefer to class it as a bass ukulele).

Founded in 1985, [ [http://www.ukuleleorchestra.com/main/ShowPage.aspx?PageID=1&SessionKey= Official Ukulele Orchestra of Great Britain website information] ] the orchestra has since performed in many worldwide venues, including the and the . The Orchestra has appeared on TV in the UK and elsewhere. Members were commissioned to write and record music for two editions of "" and the orchestra has featured on "", "", "", "" and "This Morning" and other shows on UK TV. The orchestra performed at the 50 year anniversary VE day celebrations in (with and ), before an estimated audience of 170,000. The orchestra has toured Japan, US, Canada, and Europe. Albums include "Precious Little", "The Secret of Life", "Top Notch" and a large back catalogue of recordings including a DVD, "Anarchy in the Ukulele", recorded at the in London.

Their version of "" (with vocals by Hester Goodman), reached #81 in the UK singles charts in 2005. Also featured on the CD single were covers of the instrumental "Wonderful Land" and "Natural Woman", with (male) lead vocals provided by musical director George Hinchliffe.

The orchestra has had varying line-ups over the past two decades, but is currently performing as an octet, with seven ukulele players and one bassist. The members wear traditional orchestra dress for performances, with the men in tuxedos and the women in smart evening wear. A typical Ukulele Orchestra gig comprises songs and instrumentals from all kinds of musical backgrounds: regulars include 's "Wuthering Heights" reworked as a swinging jazz number, 's "Dance of the Sugar Plum Fairy", "" performed in the style of , and the theme tune from "Shaft". The orchestra also compose and perform their own pieces, as well as arranging medleys - for example, David Bowie's "" is melded with "My Way", "", "Substitute", and more.

The group has shied away from featuring the music of , Britain's most famous ukulele musician; however, in recent years, they have included a version of his song "Leaning on a Lamppost", performed in a Russian Cossack style and retitled "Lenin on a Lamppost". [cite news|url=http://news.bbc.co.uk/1/hi/entertainment/music/3004964.stm|title=Orchestra makes ukulele cult hit|last=Youngs|first=Ian|date=2003-06-23|work=BBC News|publisher=BBC|accessdate=2008-06-12] [cite web|url=http://www.ukuleleorchestra.com/Main/ItemDisplay.aspx?SessionKey=&ItemID=34|title=Anarchy in the Ukulele DVD track listing|accessdate=2008-06-14|work=Ukulele Orchestra of Great Britain]