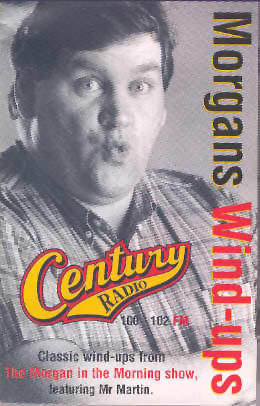 John Myers (a.k.a. John Morgan) is a British radio executive and presenter. He is currently the of , owned by the , which owns the , , and Century Radio brands.

Myers started his radio career in 1980 by finding mothers for lost lambs on 's "Lamb Bank".

He appeared on as a and programme presenter (sometimes with Eric the Monkey!) during the late 1980s and early 1990s.

In September 1994, he launched Century Radio in . He again presented the breakfast show, this time under the pseudonym of John Morgan. [http://www.gmgradiosales.co.uk/?section=news&page=latest&id=64] He released a compilation cassette of the s from his show, and even a novelty single, called "Three Rosettes", under the further pseudonym of Mr Martin to thwart his victims. He also co-presented other shows, such as the Sunday lunch time "Fun on the Phones".

During this time he also presented segments on 's magazine show. Ratings fell when he stepped down from presenting the breakfast show, and his replacement, Steve Coleman, was sacked after just three weeks. [ [http://web.archive.org/web/20050418132708/http://www.daveporter.co.uk/steve/ Reprints of various articles from local press in North East England] ]

In 1997 he left the North East to launch 106 Century FM in the . A year later, the documentary "" followed his launch of in . After seeing Myers on this documentary, Sir Robert Phillis, the former chief executive, enlisted him to establish GMG's radio division.

He became chief executive of GMGR in 2002, and joined the board of directors of the in 2006. [http://www.gmgradio.co.uk/newsarticles/news152.html]

John has grown GMG Radio through both license wins and acquisitions. During his nine years with the company it has been awarded three licenses and with the support of the GMG board he has led the purchase of from , JAZZ FM and more recently the group acquired Paisley’s from UTV, the two Century FM stations from GCap and four stations.

In March 2007 he oversaw the launch of the brand, the UK’s first mainstream commercial stations to target the 40-59 year old adult. The five existing Smooth FM and Saga stations were rebranded as Smooth Radio and the group launched the sixth station under this brand in in January 2008. This was quickly be followed by the launch of the group’s second station in Manchester in May 2008.

John is a board director of the Radio Centre, a member of the Sony Radio Awards Committee and Chairman of the Radio Academy.