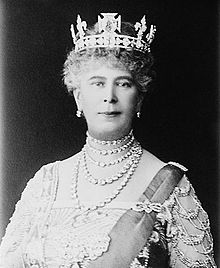 Queen Mary wearing her crown, minus its arches, as a circlet.

The Crown of Queen Mary was the consort crown of Mary of Teck, Queen Consort of King George V of the United Kingdom. It was manufactured for the coronation of George and Mary in 1911.

The crown was made by Garrard & Co and contains some 2,200 diamonds. It contained the Koh-i-Noor diamond as well as Cullinan III and Cullinan IV. In 1914 they were replaced by crystal models. It contained eight half-arches.

Unlike many earlier coronation crowns, it was specially constructed so that its arches could be removed, allowing it to be worn as a circlet.

Many of the stones from the crown were used in the 1937 Crown of Queen Elizabeth, the wife of her son, King George VI.

Queen Mary used her crown in circlet form at the coronation of George VI and at state ceremonies involving her granddaughter, Queen Elizabeth II.

Since Queen Mary's death on March 24, 1953 her consort crown has remained unworn.

Queen Mary's Delhi Durbar diadem was inherited by Queen Elizabeth, the Queen Mother and is now the personal property of Queen Elizabeth II. This tiara has been loaned by HM The Queen to her daughter-in-law, HRH The Duchess of Cornwall during a state dinner at Buckingham Palace.