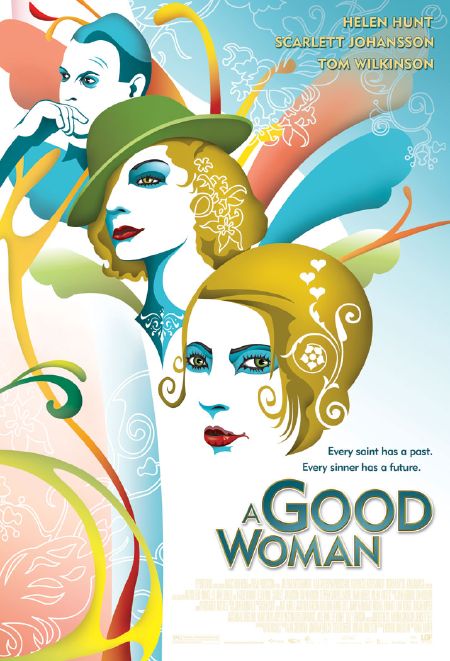 Set in 1930, the film opens in , where Mrs. Erlynne finds she no longer is welcomed by either the high-ranking men she seduced or the society wives she betrayed. Selling her jewelry, she buys passage on a liner bound for , , where she apparently sets her sights on newly wed Robert Windemere. When his car frequently is seen parked outside her villa, local gossips become convinced the two are involved in an affair.

Robert's demure wife Meg remains oblivious to the stories about the two circulating throughout the town, but when she discovers her husband's check register contains numerous stubs indicating payments made to Mrs. Erlynne, she suspects the worst. What she doesn't know is that the woman actually is her mother, who has been extorting payments from Robert in return for keeping her secret.

In retaliation for what she believes is her husband's transgression, Meg wears a shockingly revealing gown to her twenty-first birthday celebration, attended by Mrs. Erlynne - wearing the same dress - in the company of Lord Augustus, a wealthy, twice-divorced man who has proposed marriage to the American woman. Complications ensue when Lord Darlington professes his love for Meg and implores her to leave her supposedly wayward husband, an invitation she accepts.

Mrs. Erlynne, having found the farewell note she wrote to Robert, intercepts Meg on Darlington's yacht, where the two are trapped when Augustus, Darlington, Robert, and friends Cecil and Dumby arrive for a night of drinking. Robert is startled to see the fan he gave Meg for her birthday on board; while Meg makes a hasty escape, Mrs. Erlynne reveals herself and claims she had taken it from the party in error; and Augustus, thinking his fiancée was planning a romantic rendezvous with Darlington, ends their engagement.

Robert pays Mrs. Erlynne to leave Amalfi immediately and begs her not to reveal her identity to Meg. Reluctantly, she complies with his wishes, although she returns his check before she departs. On board the plane waiting to take her to a new life, she discovers Augustus, who presents her with the fan Meg gave him when she confessed to him all that had really happened. Mrs. Erlynne accepts his renewed proposal of marriage and the two depart for places unknown.

Twenty-two people from , , the , the , and were credited as producers of the film.

In his review in the "", Stephen Holden called the film a "misbegotten Hollywood-minded screen adaptation" and added, "There is an excruciating divide between the film's British actors (led by Tom Wilkinson and Stephen Campbell Moore), who are comfortable delivering Wilde's aphorisms . . . and its American marquee names, Helen Hunt and Scarlett Johansson, [who have] little connection to the English language as spoken in the high Wildean style." [ [http://movies.nytimes.com/2006/02/03/movies/03woma.html "New York Times" review] ]

Derek Elley of "Variety" stated, "In most respects, the film is so far from Wilde's play that it's practically a separate work. Bathed in pastels, ochres, blacks and golds, and easily moving around a variety of locations, it's like another slice of '30s nostalgia in the vein of "" or "". Though undeniably retaining their wit, the Wilde-isms are finally more of a distraction, imported from another world and another genre." [ [http://www.variety.com/review/VE1117924948.html?categoryid=31&cs=1&p=0 "Variety" review] ]

In the "", opined, "There's nothing to dislike about this movie . . . Yet something is wrong with "A Good Woman": The lightning never strikes. It's never quite alive . . . the process of literalizing the action, an inevitable consequence of moving a play to the screen, makes [it] less exaggerated and more somber than is ideal. But nothing can diminish the wit and the pleasure of Wilde's epigrams." [ [http://www.sfgate.com/cgi-bin/article.cgi?f=/c/a/2006/02/03/DDG0JH0VKN19.DTL "San Francisco Chronicle" review] ]

Kenneth Turan of the "" said, "The film is well intentioned and mildly diverting, but in attempting to modernize its story it has lost many of the things that make the original so memorable and not gained much in return . . . Despite its talented cast, the result lacks Wilde's trademark bite; it's soft and middlebrow, even though he was anything but . . . Although transposing this story to photogenic Italy makes for the requisite number of scenic vistas, it also creates a number of problems for the story, starting with the fact that Wilde's concerns about the restrictive nature of society don't play as well outside the rigid confines of Victorian England. Also sacrificed in this more naturalistic production is the brilliance of Wilde's artifice. The sharpness and crackling energy of his conception, frankly, makes a bad fit with the film's fitful and not particularly successful attempts to make these characters more well-rounded . . . "A Good Woman" won't ruin anyone's day, but it won't make anyone's either, and it won't get the great Irish playwright anything like the admiration his work deserves." [ [http://www.calendarlive.com/movies/turan/cl-et-woman3feb03,0,7460805.story "Los Angeles Times" review] ]

In "", Wendy Ide observed, "There’s more life in Oscar Wilde’s long-dead corpse than there is in "A Good Woman" . . . spiked with as many pithy Wildean aphorisms as could be cannibalised from his other work and crowbarred unceremoniously into the flagging script." [ [http://entertainment.timesonline.co.uk/tol/arts_and_entertainment/film/article524128.ece "The Times" review] ]