The election saw Plaid Cymru make gains at the expense of Labour, although Labour remain the largest party in the Assembly, as they have since it began. Plaid stated they would make a referendum on devolving further powers to the National Assembly a condition for a coalition.[1] Wales reported that senior civil servants before the election were preparing for three possible coalition administrations: Labour/Liberal Democrat, Labour/Plaid Cymru or Plaid Cymru/Liberal Democrat/Conservative.

Discussions between Plaid Cymru, the Conservatives and the Liberal Democrats to form a "Rainbow" Coalition broke down, and a coalition was eventually agreed between Labour and Plaid Cymru.

The Welsh Labour Party before the election had 29 seats, Plaid Cymru had 12, the Welsh Conservative Party 11, the Welsh Liberal Democrats 6, Forward Wales 1, with 1 independent (Trish Law). Mrs Law won her seat at a 2006 by-election, the seat having been won by Labour in the 2003 election. The one Forward Wales Assembly Member was elected as an independent before forming the party. Otherwise, the standings represent the 2003 results.

In general elections for the National Assembly for Wales, each voter has two votes in a mixed member system. The first vote may be used to vote for a candidate to become the Assembly Member for the voter's constituency, elected by the first past the post system. The second vote may be used to vote for a regional closed party list of candidates. Additional member seats are allocated from the lists by the d'Hondt method, with constituency results being taken into account in the allocation. The overall result is approximately proportional.

Predictions for the seat distribution were made by a number of polls before the election: 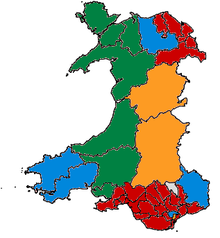 NB: candidates in BOLD text are the incumbent assembly members

Thirteen of the members elected to the Assembly in the election were not members of the previous Assembly; they include Gareth Jones, who sat in the Assembly from 1999 to 2003 but lost his seat in that election.

Nine sitting AMs were defeated at the polls.

Four sitting AMs did not offer themselves for re-election.

Due to boundary changes the composition of the outgoing Assembly will not reflect the Assembly that was elected in May 2003 (see National Assembly for Wales constituencies and electoral regions). The main changes are in the North west of Wales where the constituencies of Conwy, Caernarfon, and Meirionydd nant Conwy are replaced by Aberconwy, Arfon and Dwyfor Meirionnydd.