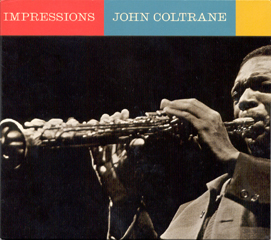 "Impressions" is a 1963 album by jazz musician . Most of the album was recorded live at the on November 3, 1961 and released in 1963 on the Impulse! label. The recording features the "classic quartet" of John Coltrane, McCoy Tyner, Jimmy Garrison, and Elvin Jones; they are joined by and on the live Vanguard tracks. Dolphy plays a memorable solo on the long modal workout "India", but lays out on all but the coda of "Impressions". Workman is at hand only on "India", to join Garrison in approximating the sound of an African drum choir.

Throughout, Tyner's presence is unusually muted; he takes his only solo on the bonus track, "", is barely audible on the two Village Vanguard tracks, and lays out entirely on "Up 'Gainst the Wall". Also, drummer — as he sometimes did for Coltrane's group during this era — replaces Elvin Jones on "After The Rain" and "Dear Old Stockholm" (which were each recorded at the same April 1963 studio session). Jones and Garrison are also uncharacteristically low-key. All told, and even more so than on his other albums, the focus on this LP is on Coltrane. The title track (based to a certain extent on 's "So What") is notable for featuring nearly fifteen minutes of Coltrane's soloing.

The music reflects Coltrane's evolving emotional and musical range, where he explores jazz modality, the , the , and a traditional Swedish folk song (this last track was not included on the original 1963 album, but appeared first on a 1970s previously-unissued LP compilation and is on the current — as of year 2000 — CD release of "Impressions" as a bonus song). The eclecticism is to be expected; the album amounts ultimately to a compilation of three years of oddments.

Whilst touring in late 1965, the only had a hastily prepared tape recording of on one side of the cassette, and Coltrane's "Impressions" and "" on the other.

"We played that damn thing 50 or 100 times, through a fender amplifier that was plugged into an alternator in the car." Jim McGuinn [ [http://books.google.com/books?id=l2CEJFgmwCgC&pg=PA2&lpg=PA2&dq=impressions+coltrane+byrds+mcguinn&source=web&ots=x2U2Irb2nF&sig=mzF0t2u4VGP0jHQF-YcG_zz64Q0&hl=en&sa=X&oi=book_result&resnum=5&ct=result Jim McGuinn quoted in Eight Miles High by Richie Unterberger] ]

The result was the recording of the celebrated single , acknowledged by the band as a direct homage to Coltrane, and to "India" on "Impressions" in particular.