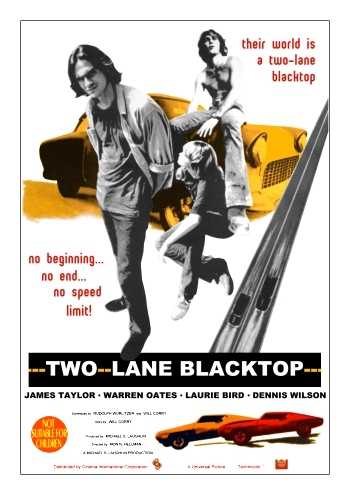 
"Two-Lane Blacktop" is a directed by , starring singer-songwriter , "Beach Boys" drummer , , and . "Esquire" magazine declared the film its movie of the year for 1971, and even published the entire screenplay in its April, 1971 issue, but the film was not a commercial success.

"Two-Lane Blacktop" is notable as a film of during the pre- era, and for its stark footage and minimal dialogue. As such it has become popular with fans of Route 66. "Two-Lane Blacktop" has been compared to similar road movies with an message from the era, such as "", "", and "".

The premise involves two rs (played by Taylor and Wilson) who live on the road in their 1955 Chevy (sometimes identified as a ) and drift from town to town, making their only income challenging local residents to races. The movie follows them driving east on Route 66 from . They pick up a in (played by Bird). In , they encounter another drag racing drifter (played by Oates, driving an "Orbit Orange" Judge) and challenge him to a cross-country race to " for pinks," or legal ownership of the loser's car. Characters are never identified by name in the movie; instead they are named "The Driver," "The Mechanic," "GTO," and "The Girl". The movie follows the group east through small towns in , , , , , and . No character makes it to Washington D.C. within the scope of the film.

After sleeping with both the Driver and the Mechanic during the winding course of the journey, The Girl disappoints both the Driver and the Mechanic when she abruptly leaves with the GTO while they are competing at a local racetrack in . The Driver pursues them intently, finding them at a diner where the Girl has just rejected the GTO's idea to visit . The Driver proposes going to to pick up some parts, but the Girl immediately rejects him. She hops on the back of a long-haired stranger's motorcycle, dropping her bag in the parking lot. The three men abruptly depart from the diner in their respective cars. The driver of the GTO, who has told a different story about himself to each of the many hitchhikers he picked up, stops for two soldiers. He tells his passengers that he has won the car while driving a home-built '55 Chevy, emphasizing the of the film. The film ends during a drag race at an airstrip in . The sound drops out, then the film seems to slow until it freezes frame, and begins to burn the film within the projector.

Will Corry's script was bought by producer Michael Laughlin and he asked Hellman to direct it. The filmmaker liked the basic idea but agreed to make the film only if another screenwriter was hired to rewrite the script. Laughlin agreed and they hired Rudy Wurlitzer. Hellman and Wurlitzer worked closely on the script. Hellman saw a picture of James Taylor on a billboard on the and asked the musician to come and do a screen test. Dennis Wilson was the last actor cast.

This film was considered a low budget film at the time of its production. It only cost an estimated US$850 000 to complete. A "" article written on location a full year before the film's release proclaimed the film an "instant classic" about "road racers and their women, cross-country adventure, the Great God Speed."

Unlike other Existential road movies of the time (such as "", and ""), "Two-Lane Blacktop" does not rely heavily on music, nor was a soundtrack album released. The music featured in the film covers many genres, including Rock, Folk, Blues, Country, Bluegrass, and R&B. Interestingly enough, the two stars of the film, and , did not contribute any music.

However, there are some notable tracks featured in the film, including "" by , the traditional folk tune "" performed by , and the original version of "" performed by the song's author .

released a limited edition of the movie on , , with only 15 000 copies made. The disc was housed in a metal tin and extras included a 48-page booklet featuring behind-the-scenes photographs and liner notes about director Monte Hellman, a 5" X 7" theatrical poster replica, and a die-struck miniature car key chain. Anchor Bay released a regular edition on , , without the poster and key chain.

At a July 2007 screening of the film, Hellman revealed that the was releasing a two-disc special edition DVD that featured a new documentary made by Hellman that included an interview with Kristofferson about how "Me and Bobby McGee" has become so closely associated with the film.

* Two of the '55 Chevys used in the filming of "Two-Lane Blacktop" were later used in the filming of "". In the early 2000s, Chevy High Performance magazine ran an article about the 1955 Chevrolets used in the film, where a third car exists (this is the car seen at the gas station) - the builder of the car (Richard Ruth) confirmed that the third car (once located in Calgary, Alberta, Canada) does exist. Current owner Walt Bailey searched for years to find it when it turned up in Canada. Walt had Richard help restore the car to its movie condition. The '55 sports a tunnel-rammed 454, a four speed and an Olds rear end. The fiberglass tilt front end, doors, and decklid are all movie correct.
* The camera car from "Two-Lane Blacktop" was also used in a later movie "(") but it was only heard and not seen. The director of "Smokey and the Bandit" felt that the used in the movie didn't have the sound he wanted, so he had the sound of the '55 Chevy's engine dubbed over the sound of the Trans Am's engine.
* In 2003 Plain Recordings released a "Two-Lane Blacktop" tribute album entitled "You Can Never Go Fast Enough" featuring , , , , , , and others.
* wrote a song called "Two-Lane Blacktop," available on his 2003 "" collection. The song loosely covers the plot of the movie. It also appears in the video game as one of many soundtracks.
* Filmed from August to October 1970. Dennis Wilson was forced to miss several concert appearances including the Folk Festival at the Monterey Fairgrounds due to his commitment to the film.
* Despite starring in the film, Taylor has admitted that he has never viewed the finished product.Fact|date=July 2008