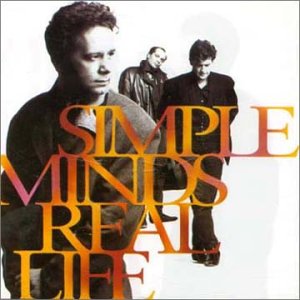 
"Real Life" is an by , released in April 1991 (see ) [ [http://www.simple-minds.demon.co.uk/discog/rl/rl_lp1.htm Real Life in the Discography section on Dream Giver website] ] . Seen as a return to the sound of "Once Upon a Time", after the stylistic departure of 1989's "", "Real Life" reached #2 in the UK, but failed to chart in the USA, despite hitting the Top 40 with "See the Lights". Perhaps, this could be due to the fact that Simple Minds' brand of Pop/Rock did not sit well amongst the popular grunge sounding bands like Nirvana, an effect they would later suffer in the UK.

The following tracks from the album were released in the UK as singles:
* "Let There Be Love"
* "See the Lights"
* "Stand by Love"
* "Real Life"

reissued the CD as part of the Simple Minds remasters in late 2002 (mini-LP replica; Virgin SIMCDX10) and early 2003 (standard jewel-case; SIMCD10). On the remastered version, a couple of differences are apparent when compared to the first edition (Virgin CDV 2660). The 2002/2003 remaster features an extended mix of "Let There Be Love", not the one used on the first edition of the album, although it is not mentioned on the cover or in the booklet. The segues between tracks have also been re-edited, so that the running time of individual tracks may differ slightly between the editions. Also, the CD version of the first edition had "Banging on the Door" split into two track in the disc's table of contents (running time was 1:16 + 4:22), but the music as such did not indicate any break between the parts. On the 2002/2003 reissue, the track is indexed as one.

* This was the first album recorded without Mick MacNeil, founder member of the band, who left after the previous tour.
* The core band on this album might be considered to comprise only Jim Kerr, Charlie Burchill, and Mel Gaynor, as only the three appear on the cover. The remaining personnel are hired-hands.
* "Let The Children Speak" is based on the 1981 Simple Minds instrumental "Theme for Great Cities" from "". Interestingly, a re-recorded version of that piece, called "Theme for Great Cities '91" appeared as a B-side of the "See The Lights" single.
* "Travelling Man" bears some resemblance to the 1983 song "Waterfront" from "Sparkle in The Rain"
* "When Two Worlds Collide" is based on the title track as is the 1995 song "And The Band Played On" which appeared on the following album "".