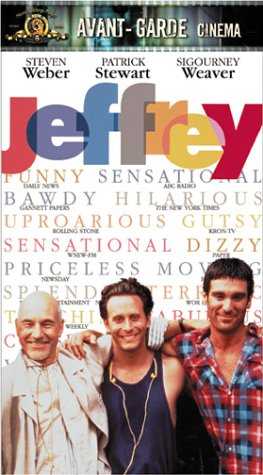 Jeffrey is a 1995 American movie directed by . It is based on a play by , who also wrote the screenplay.

The story takes place in during the height of the epidemic and revolves around the title character (Steven Weber), a gay man who has sworn off sex because of it. Almost immediately thereafter he meets Steve Howard (), a hunky, charming + man. He then experiences an emotional conflict as he must face his fear in order to accept love. The movie features cameos by , , , , , , , , and ; has a small but memorable role as the socialite hostess of a fundraiser that (in Jeffrey's imagination) turns into a cater-waiter hoedown orgy. It co-stars as Sterling, an older gay decorator whose partner () dies of AIDS complications.