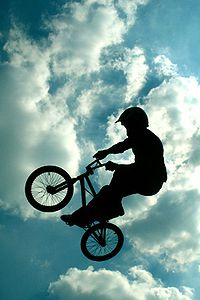 A freestyle rider practicing in the halfpipe.

Freestyle BMX is a synonym for BMX stunt riding, a sport branch that hails from extreme sports. It consists of six disciplines: street, park, vert, trails, dirt and flatland (riding in a skatepark).

BMX started in 1979 where riders spent a lot of time on their BMX bikes at a concrete skatepark in San Diego, California.

Towards the end of 1979, the BMX Action Trick Team, the first organized freestyle team was created. After the BMXA Trick Team became known, other organized trick teams were founded and quickly gained prominence. The freestyling movement at this point was very much underground. Although several BMX manufacture-sponsored freestyle teams were touring the US, they were promoting the sport of BMX in general, not specifically freestyle. Korey Hines, A professional Street rider, says, "Riding My bike is the natural feeling of fun for me. I always have fun on my bike."

The American Freestyle Association (AFA) was the first governing body for BMX freestyle, founded by Bob Morales in 1982.

Peak and decline in popularity

From 1981 until 1987, the sport of freestyling was at its zenith, with 1987 reaching its highest peak in popularity. During this time period, the sport progressed with new bike models being released all the time, as well as new components and accessories designed strictly for freestyle. For example, Haro released the Haro FST, Sport and Master each year consistently with blazing graphical colors, new look and new frame designs. Starting in 1988, freestyle declined sharply in popularity.

Freestyle BMX riders participate in several well-established disciplines. As in the other forms of freestyle riding, there are no specific rules; style/aesthetics, skills, and creativity are stressed. Street riders tend to have no brakes. If they do, it is mostly straight cable, not gyro. Usually they have front and back pegs on one side of the bike. They also have a tendency to ride without flanges on their grips. Some people like this because the flange gets in the way when they are doing a bar spin trick. Others mostly just like it because of the clean look.

Skateparks are used by BMX riders as well as skateboarders, inline skaters and freestyle scooter-riders. Skateparks themselves can be made of wood, concrete or metal. Styles of riding will depend on the style of the parks. Wood is more suited to a flowing style, with riders searching for gaps and aiming to air higher from the coping. Concrete parks usually tend to contain bowls and pools. However, it is not unusual for riders to merge the two styles in either type of park.

Concrete parks are commonly built outdoors due to their ability to withstand years of exposure to the elements. Concrete parks are also often publicly funded due to their permanent and costly nature. Parks made from wood are popular with commercial skateparks due to ease of construction, availability of materials, cost, and the relative safety associated with falling on wood instead of concrete. Parks designed with BMX use in mind will typically have steel coping that is less prone to damage than concrete or pool coping.

Vert is a freestyle BMX discipline performed in a half pipe consisting of two quarter pipes set facing each other (much like a mini ramp), but at around 10–15 feet tall (around 2.5 to 3.5 meters) high. The biggest ramp ever used in competition is the X-Games big air ramp at 27 feet (8.2 m) tall. Both ‘faces’ of the ramp have an extension to the transition that is vertical, hence the name. Coping is a round metal tube at the lip of the vert that helps freestyle BMXers do grinds, and stalls on the lip of the vert.

Riders go up each jump, performing tricks in the air before landing into the transition having turned 180 degrees (assumptively. variations include 540, 900). A typical run involves going from one side to the other, airing above the coping each side. Also possible are 'lip tricks' - tricks on the platform at the top of the ramps before dropping into the ramp. Many tricks consist of the rider grabbing a part of the bike or removing body parts off the bike.

A freshly built double at the overlook trails in New Jersey.

Trails are lines of jumps built from dirt (heavily compacted). It can also be named as a pack such as a 4 pack, 6 pack and 8 pack. The jumps consist of a steep take off, called a lip, with an often slightly less steep landing. The lip and landing are usually built as separate mounds, divided by a gap. The gap is measured from the topmost part of the lip, horizontally to the topmost part of the far side of the landing. Gaps typically range from only a couple of feet to over twenty feet. A moderate gap is around twelve feet.

Trails riding is sometimes also referred to as “dirt jumping”. Most trails riders maintain that a subtle difference exists in the style and flow of “dirt jumps” and “trails”; trails riders focus more on of a flowing smooth style from one jump to the next while performing more stylish tricks, while dirt jumpers try to perform the craziest tricks they can over larger, less flow-oriented jumps.

Although many regard trails and street as being completely opposite, the attraction is similar — trails riders build their own jumps so their riding is limited only by their creativity and resourcefulness.

Trails riders usually run a rear brake only as they have no use for a front brake, and usually a rotor (gyro) to make it easier to do barspins, as they do not have to spins the bars back the other way to untangle it, which is hard to do on trails. In general, trail/dirt jumping bikes have longer wheelbases (chainstays) than other BMXs to aid with stability, the added stability is important in trails riding. 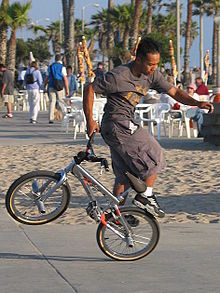 Flatland BMX occupies a position somewhat removed from the rest of freestyle BMX. People who ride in the above disciplines will generally take part in at least one of the others, but flatlanders tend to only ride flatland. They are often very dedicated and will spend several hours a day perfecting their technique.

Flatland also differs from the others in that the terrain used is nothing but a smooth, flat surface (e.g. an asphalt parking lot, basketball courts, etc.). Tricks are performed by spinning and balancing in a variety of body and bicycle positions. Riders almost always use knurled aluminum pegs to stand on to manipulate the bike into even stranger positions.

Flatland bikes typically have a shorter wheelbase than other freestyle bikes. Flatland bikes differ from dirt jumping bikes and freestyle bikes in one way. The frames are often more heavily reinforced because the people riding flatland often stand on the frames. This shorter wheelbase requires less effort to make the bike spin or to position the bike on one wheel. One of the primary reasons flatlanders often ride only flatland is the decreased stability of a shorter bike on ramps, dirt and street.

A variety of options are commonly found on flatland bikes. The most unifying feature of flatland bikes is the use of four pegs, one on the end of each wheel axle. Flatland riders will choose to run either a front brake, a rear brake, both brakes, or no brakes at all, depending on stylistic preference.

The vast majority of bmx bikes have 20-inch (51 cm) wheels. Frame sizes and geometry vary, but the top tubes are usually between 20 to 22 inches (51 to 56 cm) long. Beginner riders tend to purchase store-bought complete bikes and often customize their bike with aftermarket parts, generally as parts break (such as forks, pedals and cranks), to suit their specific needs. However, more experienced riders usually build custom bikes from the ground up to suit their preferences and style of riding, which is much more expensive but allows for greatest customization based on personal preference.

Generally, street riders use slicker tires for more grip on concrete, and may use up to four axle pegs for grinding. Riders generally have a preferred side for grinding and may run 2 pegs only on one side. However, adding an additional 2 pegs to the non-preferred side can open up a great deal of trick variations such as crooked grinds. Street riders also tend to ride big bars for easier tailwhips. Smaller gearing is also preferred among street riders. Street riders tend to run brakeless, for a number of reasons; for example, they claim that barspins are smoother, and that they have more control over the bike.

Park bikes are very similar to street bikes. However, some park riders prefer to use brakes (rear or both) for an increased variety of tricks and more control. Park bikes may differ from street bikes in the fact that they are not as reliant on heavy duty high-strength parts, as park riding is much less stressful on the bike.

Dirt riders usually don't have pegs unless they want to do peg-specific non-grind tricks such as rocket airs, and they use knobby tires for better grip in the loose dirt. Dirt bikes also tend to run only a rear brake and have longer top tubes and wheelbases. Many riders use bigger bars for more control, although big bars have become a trend among kids and popular professional riders. Dirt bikes generally at least have chromoly top and down/seat tubes and forks to increase durability and prevent bending of parts (especially forks) when landing large jumps.

A professional who primarily competes in park contests will probably have a gyro with rear brakes only, zero to 4 pegs, and a lightweight bike. This is because riders in contests usually have a limited time, 60 seconds or less, and have to perform very difficult tricks consistently.

Vert bikes are relatively heavy for stability and control, with four pegs.

Flatland riders’ bikes usually run four oversize pegs, and smaller, lighter frames, often with pre-bent tubes to make it easier to do flatland tricks. Flatland BMXs most of the time have both front and rear brakes, as many tricks require them to exit a trick or aid in weight distribution. Top tubes on flatland bikes are also shorter (about 17–19 inches (43–48 cm)) Flatland bikes almost always have small sprockets (20 to 25 teeth) and low gearing, to make it easier to pedal out of tricks, as there is no need for them to ride fast.

Before there was a “true” freestyle bicycle, riders used BMX racing frames for jumping and for performing flatland maneuvers.

Grinds are where a rider’s bike will slide along a surface (such as a rail, ledge or lip of a ramp) on a part of the bike other than the wheels. Usually “stunt pegs” are used; these are short tubes attached inline with an axle that project out from the main frame so that they can slide along the surface which they grind. Some grinds also involve the cranks and pedals.

Variations and combinations of these tricks also exist, for example a 360° tailwhip would be where the rider spins 360° in one direction and the frame of the bike spins 360° around the steer tube, both bike and rider will then meet again, with the rider catching the pedals, facing the same direction as before the trick.

Flatland tricks are not just used within flatland BMX, but also in street BMX. Flatland tricks usually involve much balance, more often than not with only one wheel in contact with the ground.

A rather complete history of freestyle bmx can be read here (some parts are written in French):