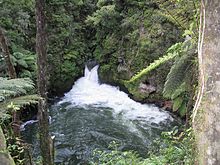 Okere Falls is a small town located 21 km from Rotorua on SH 33 between Rotorua and Tauranga on the North Island of New Zealand. The town is a popular spot for fishing & rafting and is known for its beautiful lakeside and waterfalls. There are commercial rafting companies and holiday park accommodation within the town. A seven metre high waterfall lays claim to being the highest commercially rafted waterfall in the world.[1]

The Okere River is a site of significant Māori cultural and spiritual values. Okere River meaning "the place of drifting", is an 11 km stretch of the Kaituna River. A well-formed bushwalk with scenic lookouts over Okere River and its spectacular waterfalls can be found on Trout Pool road.

In the Fifth season of CBS The Amazing Race, The teams had to make their way to the Rotorua Museum where their next clue was a detour. From there they had the option of Clean or Dirty, teams that chose dirty had to search for their next clue at Hell's Gate while others who chose clean got to go whitewater river sledging at Okere Falls.

For the Second series of Jack Osbourne: Adrenaline Junkie. Jack Osbourne can be seen trying the white-water kayaking as a part of the show's challenge before making his way to Japan.