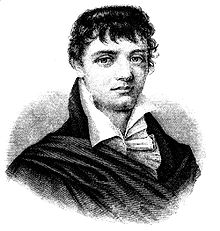 Gottlob Ferdinand Maximilian Gottfried von Schenkendorf (Born 11 December 1783 in Tilsit in East Prussia; Died 11 December 1817 in Koblenz) was a German poet, born in Tilsit and educated at Königsberg. During the War of Liberation, in which he took an active part, Schenkendorf was associated with Arndt and Körner in the writing of patriotic songs. His poems were published as Gedichte (1815), Poetischer Nachlass (1832), and Sämtliche Gedichte (1837; fifth edition, 1878). For his Life, consult Hagen (Berlin, 1863); Knaake (Tilsit, 1890); E. von Klein, M. von Schenkendorf (Vienna, 1908).

This article incorporates text from an edition of the New International Encyclopedia that is in the public domain.