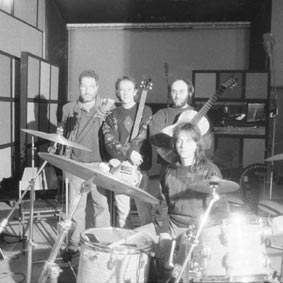 During the 1990s in and former political problems such as sanctions, isolation and poverty had influence on cultural life. There were not so many licensed foreign albums, and even if they were people did not have money to buy them. In this atmosphere two artists from , Rastko Ćirić and Goran Skrobonja, decide to record an album. The album was not an ordinary one, as the two artists were huge fans and wanted to reinvent the songs did not release by using the titles of the tracks. It was the year 1995, the 30th anniversary of the famous album and so the band got the name The Rubber Soul Project. The lyrics were written by Skrobonja, one of the best Horror/SF stories in and the music was written by Ćirić, professor of Illustration at the School of Applied Arts, University of Arts in . Then Ćirić was joined by Nebojša Ignjatović, professor of double-bass at the University of Arts in Belgrade and Miroslav Cvetković, bass player of the famous Yugoslav band Bajaga & Instruktori. The "Ringo" of the band was Čedormir Mačura, the drummer of Bajaga & Instruktori. He also sang lead vocals on the track "" which was an imaginary track with Ringo on vocals. The producers of the album were Ignjatović and Cvetković, the latter was also the recording engineer. The equipment used during the recording process was the same one used in the Sixties to produce the same ambient found on Beatles records. Miroslav Cvetković played the , the same type used and still uses, to produce the authentic round sound and melodic bass-lines. The drum set was of course Ludwig, the type Ringo played on all Beatles records. The studio equipment was used in the recording process was also from the time The Beatles were still active. And the thing that makes the whole thing complete and very similar to The Beatles sound are Rastko's vocals which sound like John Lennon recorded them. The album includes a George track with a sitar called "Indian Rope Trick", simple rock 'n' roll songs like "", "" and "" and psychedelic-style songs from the 1965-1967 Beatles era like "", "" and "Rubber Soul (song)". The titles of the tracks were unreleased songs, the members knew the year of the original recording for only a few tracks, and for the rest they used their imagination in order to make the sound as similar to the ' sound as they could. In , an audio tape edition was published in March 1996 by Records, the biggest publishing company in as a license edition, and it provoked good critics and surprisingly emotive reactions both from music critics (No. 1 on Album Top Chart) and from the audience of all ages. An article about the project was published in the '' magazine (April 6th 1996).A copy of the tape was sent to who said he enjoyed listening to it. The release also included a novella called " [Rubber Soul] " which could be read on Rastko's site. In February 2007 Skrobonja, Ćirić, Cvetković and Ignjatović signed with American Rise Media a contract for distributing RSP in America. The novella was translated and adapted in English. The edition includes an audio-book of the novella, the album, music videos and the documentary by Dinko Tucaković.

Musicians involved with the project

The band who joined Rastko Ćirić to perform the Rubber Soul Project songs was not the same one from the CD. At concerts were the musicians from the 'Fathers & Sons' group: Bozidar Skipic (lead guitar, vocal), Branimir Kosar (keyboards), Nedeljko Kusic (bass guitar), Nikola Djokic (drums), and the special guest star Maja Klisinski (percussion). Until today, more than 10 live concerts were performed at different locations in Belgrade, among which The 'Belgrade Tour 99' was stopped by the NATO bombing of Belgrade:The British Council Cultural Centre, 16. 3. 1999, The Center for Cultural Decontamination, 19. 3. 1999,Hemingway Club, Zemun, 21. 3. 1999 and The Museum of Yugoslav Kinotheque, 23. 3. 1999. On April 21st, 2001 in The Museum of Applied Arts in Belgrade the original lineup plus Branko Kosar and Maja Klisinski performed songs from the album. The band also performed live in England.

The documentary called The Rubber Soul Project describes the circumstances among which the whole idea of recording the album came, also the recording process, interviews with the band members and some of the associates of the band members. It was directed by Dinko Tucaković and written by Srdjan Koljević in 2004. The story begins in 1993 in Belgrade where the people are on the edge of civil war and whose residents are depressed. In that circumstances a group of artist enter the studio to record a Beatles tribute album by reinventing unreleased and unknown songs. In 52 minutes the film expresses not only a simple recording session of musicians but the whole state of living during the 90s in . The movie appeared on festivals in , , and other festivals. In it appeared on The Author Films Festival and of course in cinemas all over the country.

After the success of the debut album, Rastko began working on new track and recorded a demo with fourteen new songs, this time without using titles. In the RSP documentary Rastko is talking about new song and the dilemma about the style of the songs, either using old techniques used or new, modern technology. The album is planned to be released, but the date is still unknown.