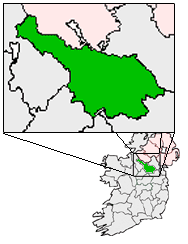 Shercock (Irish place name|Searcóg|Young love) is a small village situated in the east of , Ireland. The current population of the village is around 500 people with almost triple this amount in the surrounding areas.

Shercock is located at the intersection of the R162 and R178 s.

The village was founded in the early 17th century as a Plantation village to accommodate mainly Presbyterian British settlers who colonised this part of County Cavan.Verify source|date=July 2007 Usually these new settlers gave their towns English or Scottish names - near neighbours are , , and - but the existing Irish names were maintained in Shercock. The modern Irish language name is Searcoig or Searcog; either name may be translated literally as "young love", and there is no reason to believe that the name has changed in the last 400 years. Possibly the straitlaced and God-fearing Scots of the early 1600s did not realise the risque implications of the name they inherited from the local Gaelic population.

Equally strangely, the local townlands in this northern Protestant enclave Verify source|date=July 2007 almost all retain their ancient Gaelic names. For example, the townland of Lecks, on the Kingscourt road on the outskirts of Shercock, has been so named for a thousand years because of the flat-slabbed rocky landscape ("leac" is the Irish word for a flagstone). By contrast, townlands in the predominantly Gaelic west of Ireland very often have distinctly English names.

By the mid 19th century the town and immediate area had a population of about 5,000. However, the great famines and subsequent emigration severely affected the county of Cavan, reducing the population by 50% between 1841 and 1891.

The area is "" country, being a landscape of small hills and lakes formed as the last ice age withdrew.

The Shercock area's main industry for nearly 300 years was the growing of for linen-making. The industry gradually died away with the decline of the linen industry in .

Nowadays the village is an attractive and prosperous place with some light industry and a small number of tourists based mainly on watersports and angling. , on the edge of the village, is a noted coarse fishing lake with thousands of metres of shore for free all-year angling. There are several smaller lakes within easy reach of the village.

* The family of playwright ("The School for Scandal") had an estate in Shercock; Lewis' "Topographical Dictionary of Ireland" cites Shercock as Sheridan's birthplace, though most sources say Dublin. [http://www.libraryireland.com/topog/s.php]

* 's 1948 novel "Tarry Flynn" is set in the countryside around Shercock.