Cooperstown, New York, as depicted on an 1890 panoramic map.

Cooperstown is a village in Otsego County, New York, USA. It is located in the Town of Otsego. The population was estimated to be 1,852 at the 2010 census.

Cooperstown is best known as the home of the National Baseball Hall of Fame and Museum. The Farmers' Museum, The Fenimore Art Museum, Glimmerglass Opera, and the New York State Historical Association are also based there. More recently, nearly 1,000 youth baseball teams descend on Cooperstown every summer to participate in some of the largest baseball tournaments in the country. Starting in 2010, Cooperstown now has an official baseball team of its own. The Cooperstown Hawkeyes are a collegiate league team who will play against many other teams from the northeast during the summer. They will play their home games at the historic Doubleday Field.[2]

The village was part of the Cooper Patent, which Judge William Cooper purchased in 1785 from Colonel George Croghan. The land amounted to 10,000 acres (40 km2). Judge Cooper was the father of renowned American author James Fenimore Cooper, author of The Leatherstocking Tales, a series of novels which includes The Last of the Mohicans. Contrary to belief, the village was named after Judge William Cooper, and not his son.

People of note in Cooperstown

Aside from James Fenimore Cooper, noted Cooperstown authors include his daughter Susan Fenimore Cooper (author of Rural Hours), great-great-grandson Paul Fenimore Cooper (author of Tal: His Marvelous Adventures with Noom-Zor-Noom), prolific poet W. W. Lord who captured Cooperstown in many of his poems, as well as modern author Lauren Groff, who has written extensively about her town, notably in The Monsters of Templeton, a story that brings several Cooperstown legends to life. Marly Youmans,[4] a resident of Cooperstown, has written several poems and short subjects about Cooperstown, including the soon to be released short novel "Glimmerglass"[5] which explores some of the mysteries of the town.

The source of the Susquehanna River is in Cooperstown at Otsego Lake. Blackbird Bay of Otsego Lake is north of the village. 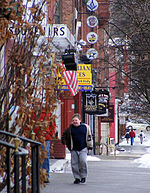 There were 906 households out of which 23.2% had children under the age of 18 living with them, 41.9% were married couples living together, 8.7% had a female householder with no husband present, and 47.1% were non-families. 41.4% of all households were made up of individuals and 19.2% had someone living alone who was 65 years of age or older. The average household size was 2.05 and the average family size was 2.83. 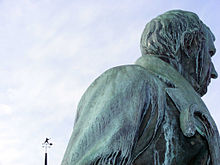 Cooperstown is best known as the home of the National Baseball Hall of Fame and Museum. According to an interview conducted in 1906 by the Mills Commission, nearby resident Abner Graves attributed the game's invention to his deceased friend, Abner Doubleday. Graves stated that Doubleday invented baseball on a cow pasture within the village in 1839. This is the present site of Doubleday Field. (The actual origins of baseball are much less clear.) Part of the film A League of Their Own was filmed in Cooperstown. Several nationally recognized tournaments are held at Cooperstown. Cooperstown Dream Park while not in the Village of Cooperstown, hosts between 96 and 104 teams every summer each week for teams in the U10 to U12 levels. The Cooperstown Dreams Park (CDP) is in Hartwick Seminary, NY about 5 miles south of the Village. For many, attending a tournament at CDP is the climactic event in youth baseball. Several professionals including David Price and Matt Garza have attended CDP.

Several other attractions are scattered around town. These include the Farmers' Museum, the Fenimore Art Museum, The New York State Historical Association's (NYSHA) library, Brewery Ommegang, and the Clark Sports Center (a large fitness facility). The Clark Sports Center is where the annual Hall of Fame Induction is held.

Once known as the Village of Museums, until the 1970s Cooperstown boasted the Indian Museum (adjacent to Lakefront Park), The Carriage and Harness Museum (displaying a world-class collection primarily from F. Ambrose Clark's estate; now the Bassett Hospital offices on Elk Street), and The Woodland Museum near Three Mile Point. The latter, opened in 1962 by heirs to the Anheuser-Busch company, would fold in 1974, but not before running a close third in annual attendance to the Hall of Fame and Farmers' Museum.

The internationally-renowned Glimmerglass Opera is closely associated with Cooperstown. Founded in 1975, the company originally performed in the Cooperstown High School auditorium. In 1987, the company relocated to farmland donated by Tom Goodyear of the Cary Mede Estate 8 miles (13 km) north of the village. Here was built the acclaimed Alice Busch Opera Theater, the first opera-specific hall in the United States since 1966.

The Clark Family, whose fortune originated with a half-ownership of the patent for the Singer Sewing Machine, has lived in Cooperstown since the mid-19th century.

Clark holdings include interests assembled over a century and a half (now held through trusts, foundations, and so on). Their dominance is reflected in Clark ownership of greater than 10,000 acres (40 km2) of largely undeveloped land in and around greater Cooperstown.

In the village, the Otesaga, the Cooper Inn, Clark Estates, and the Clara Welch Thanksgiving Home are all Clark properties. In addition, the Clarks were founding partners of (and retain interest in) the Baseball Hall of Fame and the Mary Imogene Bassett Hospital.

Cooperstown still receives support from The Clark Foundation. It has donated to a variety of causes including various scholarships, non-profit organizations, and village services. The family has also donated land for the central and high schools (formerly stables) as well as for parks such as Fairy Springs and Council Rock, and recently, for a new little league baseball field.

Jane Forbes Clark II, the primary family heir today, has continued this commitment by purchasing strategic land to ensure the preservation of village entry points, as well as overseeing the expansion of the various Clark holdings. 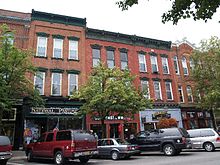 Superficially, the downtown commercial district looks not unlike it did in the 1970s. However, like many small communities impacted by changing tastes and the rise of big box stores, Cooperstown's downtown has undergone significant change over recent decades.

Through the 1970s, Main Street was still home to no fewer than five grocery stores, including Danny's Market, Pic N Pay, Victory Markets, and an A&P. Western Auto had a branch on Main Street. JJ Newberry's had a two-story five-and-dime with a food counter. Smalley's, originally a stage theater, had a single screen across from a Farm & Home store. With its post office, library, and the Baseball Hall of Fame, Main Street resembled a true village square.

Today, the village has fewer traditional services for year-round and seasonal residents. Once boasting half a dozen gas stations, the village now has but two. Traditional grocers have been reduced to one. Hardware stores such as Western Auto, McGowan's and Farm & Home have been displaced by an Ace Hardware just outside the village. Smalley's Theatre is a collection of baseball memorabilia shops, while Newberry's has become a single-floor general store with the basement stairs boarded up. Most Main Street shops cater to the tourist trade, with baseball being by far the biggest type of business.

A number of businesses are seasonal and close in the winter, because the economy does not thrive as well during the off seasons of tourism.

For a village with limited access to professional architects, significant residential, commercial and religious structures exist, many in pristine condition.

Original residences related to the founding Cooper family, such as Edgewater and Heathcote, are still standing. Otsego Hall, James Fenimore Cooper's residence which once stood in what is now Cooper Park, has been lost, along with his chalet. The cottage built for his daughter, Byberry, remains on River Street, albeit in altered form. Fynmere, a grand stone manor from the early 20th century, erected by Cooper heirs on the eastern edge of town, was designed by noted architect Charles A. Platt. Later donated to the Presbyterian Church as a retirement home, the property was razed in 1979. Both its grounds and those of neighboring property Heathcote (extant today), built for Katherine Guy Cooper (1895–1988), daughter-in-law of James Fenimore Cooper III, were laid out by noted landscape architect Ellen Biddle Shipman.

Residences, business, and properties related to the Clark family abound within the village. From the original family seat of Fernleigh to the 1928 Georgian manor of West Hill, the properties are exceptionally well cared for. Fernleigh is a Second Empire stone mansion designed by New Jersey architect James Van Dyke and built in 1869. The original garden at Fernleigh, located to the south of the mansion, included a servants' house and Turkish bath; both details have since been lost. In 1923 Stephen C. Clark, Sr. commissioned Marcus T. Reynolds and Bryant Fleming (a landscape design professor at Cornell University) to design new gardens for Fernleigh.[8]

Other Clark manor homes - such as those of Robert Sterling Clark and brother F Ambrose Clark - have been razed in the past 30 years. Edward Severin Clark built a farm complex at Fenimore Farm in 1918 (now the Farmers Museum). His stone manor, built in 1931, was bequeathed to the New York State Historical Association and today serves as the Fenimore Art Museum. Other structures, such as the Baseball Hall of Fame, Otesaga Hotel, Clark Estate Office, Kingfisher Tower, which lies on the east side of Lake Otsego, Bassett Hospital, and The Clara Welch Thanksgiving Home, exemplify Cooperstown's staggering architectural wealth.

The Bowers family Lakelands manor, neighboring Mohican Lodge, and their former estate of Willowbrook (1818; presently the Cooper Inn) serve as further examples of grand homes erected by affluent residents. The Bowers family received the land patent extending from current-day Bowerstown to very near Cherry Valley, New York, upon which Congressman John Myer Bowers built Lakelands in 1804. Woodside Hall, on the eastern edge of the village proper, was built c. 1829 by Eben B. Morehouse and was subsequently owned by several prominent individuals, including (in 1895) financier Walter C. Stokes of New York City. His son, Walter Watson Stokes, served in the New York State Senate from 1933 to 1952. Prior to the Stokes' ownership, the home was visited by Martin Van Buren, the eighth President of the United States.

The Village Offices and Cooperstown Art Association are housed in a neo-classical building designed by Ernest Flagg, famed for Manhattan's 47-storey Singer Building and the Boldt Castle on the St. Lawrence River. The building was originally commissioned by Elizabeth Scriven Clark in 1898 as a YMCA. Robert Sterling Clark, son of Elizabeth, gave it to the village in 1932.

Several prominent buildings in town were designed or updated by noted architect Frank P. Whiting, who originally worked under Ernest Flagg. A resident of New York City and Cooperstown, Whiting was also a noted artist. Whiting designed the Farmers Museum farm buildings[9] and the shingle-style manor at Leatherstocking Falls Farm (residence of the late Dorothy Stokes Bostwick Smith Campbell). Landscaping was done by the all-female firm of Wodell & Cottrell in the 1930s.[10] Whiting also designed 56 Lake Street. Cooperstown architecture was featured in the 1923 edition of The White Pine Series of Architectural Monographs (Volume IX), written by Frank Whiting.

In 1916, financier William T. Hyde acquired Glimmerglen, a lakeside property north of Fenimore Farm, from the Constable family.[11] The house burned to the ground shortly thereafter and was rebuilt by society architect Alfred Hopkins, who also designed a new farm complex, gate house, and assorted dependencies. The estate was featured in a multipage advertisement in Country Life magazine in late 1922 when the property was put up for sale. Hyde (no relation to the family of Hyde Hall in Springfield Center) raised champion sheep (Shropshires, Cheviots, Southdowns) at Glimmerglen Farm. The manor and greenhouses were razed in the late 1960s after their acquisition by the Clark family. The stone gatehouse, featured in the Architectural Record, is extant today, as is the boathouse and the distinctive cottage known as Winter House.