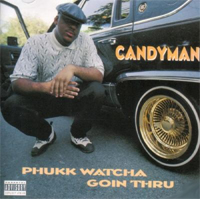 "Phukk Watcha Goin' Thru" is the fourth album by rapper, Candyman. The album was released on , for idependent record label, Ruckus Records and was produced by Candyman. The album was yet another critical and commercial failure for Candyman, not only not charting on any album charts of featuring any hit singles, but barely selling any copies. A sequel to Candyman's only hit single, "Knockin' Boots" appeared on the album entitled "Knockin Boots Pt. 2".