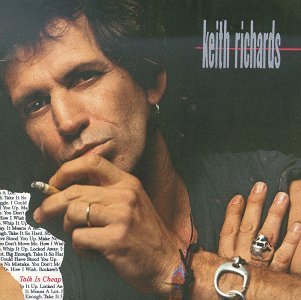 
"Talk Is Cheap" is the solo album debut by , co-leader of , and was released in 1988. Recorded and released following a brief creative and personal fallout with , "Talk Is Cheap" received glowing reviews upon its release.

Relations between Jagger and Richards had grown tense over the course of the 1980s, as they began to differ on the musical direction of their famous band. The image-conscious Jagger was keen to follow the trends and keep The Rolling Stones current, while Richards wanted to preserve their reputation and roots. When Jagger was more interested in pursuing his solo career instead of touring for "Dirty Work" in 1986, Richards was stung by Jagger's move and began contemplating a solo project for the first time.

Teaming up with Steve Jordan, who had worked on "Dirty Work", the pair wrote several new songs (one of which, "Almost Hear You Sigh", would be placed on The Rolling Stones' "" in 1989 with lyrical modifications by Jagger). Recording began in August 1987 in and continued sporadically until the following May with visits to and . In order to assert his independence further, Richards would sign with , while The Rolling Stones were currently under contract with (although they'd switch over to Virgin themselves in 1991).

Of the friends and celebrities taking part, including Ivan Neville, , , , and , the most famous is former guitarist for The Rolling Stones, .

The songs recorded for "Talk Is Cheap" find Richards in a confident and carefree mood, with a very natural air to the proceedings. The only moment where the setting turns somewhat heated is in "You Don't Move Me", a thinly-veiled response to Jagger that was well-publicised by the media upon the album's unveiling.

Released in October 1988, "Talk Is Cheap" was released to a very receptive critical reaction (many reviewers jokingly called it the best Rolling Stones album in years) and it peaked at #37 in the UK and #24 in the U.S., where it went gold.

All songs by and Steve Jordan.