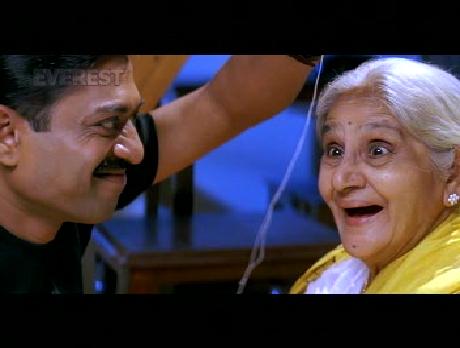 The songs from this film have become particularly popular.

Shriranga Deshmukh (or "Ranga") is a frustrated man. His frustration is particularly towards women the women in his life - his wife, his mother and particularly his ever-angry boss. He feels they are in control of his life. During a trip to his native village, "Ranga" participates in an annual festival. During this trip he discovers that he has now gained the ability to listen to women's thoughts.

At first, he is confused. But soon, on being counseled by a female , he learns to look at his abilities as a gift instead of a curse. From that point onwards, the insight into the female mind helps him understand the women around him. It helps him see their frustrations and dilemma's brought on by every day life.

Being good at heart, he slowly starts using this understanding to improve his relationship with his wife, mother, grandmother, his boss and even his father. He is also able to solve some of their problems, making them happier than before. As an incentive, he also save the city by foiling the plans of a would-be female .

The film highlights the life and the problems of a common man living in a city like . It highlights his transition from a frustrated person to someone who is happy, content and in charge of his life.